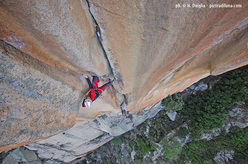 De rerum natura, new route by Oviglia and Larcher in the Bavella, Corsica
Photo by Larcher/Oviglia 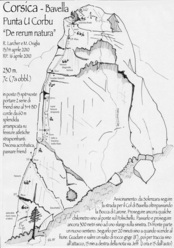 De rerum natura, new route by Oviglia and Larcher in the Bavella, Corsica
Photo by Larcher/Oviglia

When you think about rock climbing in Corsia, you cannot help marvel at the lushous Val Restonica close to the old capital Corte or, further south, the barren Col du Bavella, undoubtedly one of Europe's granite climbing paradises. There's a small and popular crag here at 1200m but above all, there's a fantastic world of rough granite towers and rock faces with fabulous multi-pitch routes locaed just beneath the pass. The Teghe Lisce for example host the famous Le dos de l’éléphant while nearby Punta u Corbu is home to two great outings first ascended by the brothers Arnaud and Francois Petit: the first is Jeef, a masterpiece in terms of beauty and the demanding nature of its climbing graded 7a+, while the second is the difficult and extraordinary Delicatessen, a reference multi-pitch climb first ascended in 1992 and then freed in 2001.

It may seem incredible, but right next to Delicatessen the Italians Maurizio Oviglia and Rolando Larcher have now climbed a new route they've called De rerum natura (230m, 7c max, 7a obl, /RS2+/II). Incredible because the beautiful climb ascends an obvious line of extraordinary cracks and tafoni - characteristic formations in this area - never considered previously. The two carried out the first ascent over two days then redpointed the route on 16 April. The route description is succinct: "splendid climbing up athletic cracks", but we're certain that this latetst Larcher & Oviglia creation will mark a new start to the discovery of the immense potential of the barren and beautiful Col du Bavella.