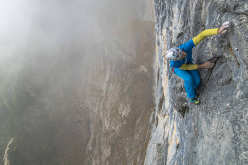 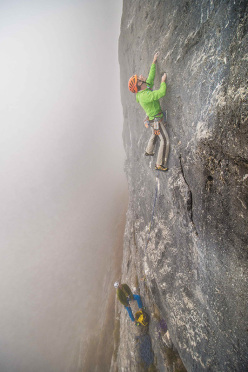 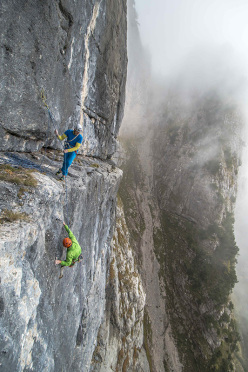 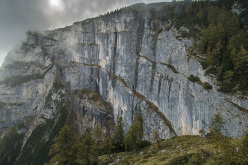 The report by Rolando Larcher and Nicola Sartori about the first ascent of Happy Ledge (335m, 7c+ max, 7b obligatory), a new rock climb in the beautiful Val Trementina, a little jewel in the Paganella crown: Verdon-like, wild and little-known.

After years of climbing and searching I never thought I'd find a great face, big, difficult and with plenty of unclimbed rock so close to home. A recurring dream for many, for me it came true last summer when I climbed a new route up forgotten Paganella's hidden B-side, its east face in Val Trementina.

For decades Paganella has always been the peak used by alpinists from the Trentino region, visited regularly until the late '70s, until the cable car that leads from the bottom of the valley directly to the summit was dismantled. After which the sunny Roda faces, crossed by numerous routes established by the most famous local climbers such asDetassis, Maestri, Stenico, Loss, Cestari, Steinkotter, Pilati etc slowly fell into disuse. During this heyday period Val Trementina remained in the backgound, the first route dates back to '71 with ANA Perù by Pilati-Chini-Pellegrini while the second, Momenti Magici by Sebastiani-Cagol-Zenatti, was climbed in 1986. During the second half of the '90s a further 5 new routes were climbed (4 by Lunel, 3 of which together with Milani), but there was still a lot of unclimbed rock.

I first heard raving reviews about this place in 1986, from the three first ascetionists of Momenti Magici, my friends and climbing partners. They talked about its great quality, solid rock and the exposure and although this got me curious, I never went to see for myself. After that, more recently, I got to know Davide Lunel who knows the Paganella like the back of his hand, having also established a number of new climbs. Whenever we met he'd tell me I simply had to go and see the face. This June I decided to satisfy my curiosity and I was dumbstruck! Such a beautiful place so close to home! Incredible! And amazingly I'd never seen it before, despite having got within a hair's breadth on countless occasions, even on skis.

Despite facing out towards the Adige valley, high above Zambana and the Rotaliana plateau, due to its tightly curved shape, due to the shade that reaches it early in the afternoon and also due to its 300m in height that drop off into the 1600m precipice, Val Trementina always appears discreet and unassuming when you look at it from the valley floor, where river Noce flows in river Adige.

After having discovered it I immediately made it one of my summer objectives and Nicola Sartori was going to be my motivated partner. Summer turned out as everyone knows, very poor indeed, but thanks to its particular location, its relatively low altitude, warmer temperatures and thanks to the Brenta group that shields it from incoming storms, this face became my only summer objective. We began in late summer and ended the route in autumn.

We needed three days to get to the top, plus a fourth that... ended at the crag, because the face was soaking wet. Thanks to a good ledge at mid-height we reached the top for the first time having skipped the 4th pitch as this was still wet. A rather strange occurrence, quickly fixed with another half-day on the route, thanks to Herman Zanetti's logistics and support. We were worried it would rain so we quickly reorganised and got ready for the redpoint. The stamina required to send it surprised us somewhat, but on 3 October we completed our project, wrapped in a thick blanket of fog.

Some details render this climb a truly original outing; the rock is always excellent, it's easy to reach, and can easily be escaped at half-height. And then there's the particular start, in a cave that spirals upwards to a window a few metres above the deck, with a great thread pro. Not to mention the wild countryside, the home to chamois deer, with splendid views over Val di Non, Val d'Adige, Val di Cembra to Valsugana. In the background Lagorai, Catinaccio, Pale di San Martino, Marmolada and Punta Penia, where we've had so many adventures in the past. And, last but not least, the detail that gave the route it's name: all belays are on comfortable ledges, a real rarity on a face this steep. So Happy Ledge to all!

I would like to thank Nicola for his enthusiasm and passion, Herman for his friendship and curiosity and Paolo Calzà, aka Trota, for his great photos.

P.S. If orange men appear at half-height, in the middle of nothing, in single file and without too much hustle and bustle then don't worry, they're only cavers on their way home, having exited from the Battisti cave.

After such a rainy summer I was feeling really unmotivated, but then I received a call out of the blue, a wake up call. It was Rolando, he suggested we climb a new route! This time close to home, on the upper reaches of Mount Paganella. The beauty of the rock, the particular form of the face with comfortable ledges, the starting cave that resembles a spiral staircase and connects to natural holes above Val d'Adige, all make Happy ledge a truly unique route.

We spent 4 splendid days establishing the route, between laughter and moments of serious concentration. The cliff hooks were always precarious given the rock formation (vertical, crimps and slopers). Just one day to free it, and climbing all 9 pitches clean proved demanding. A real battle against the pump! And now we're ready for our next adventure!