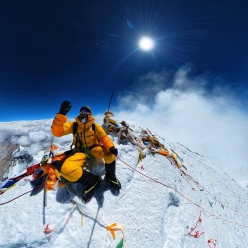 David Göttler on the summit of Everest without supplementary oxygen on 21/05/2022. He reached the summit at 9.45am local time, after a 12 hour 20 minute summit push from Camp 4
Photo by David Göttler 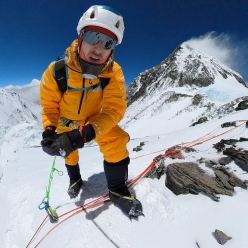 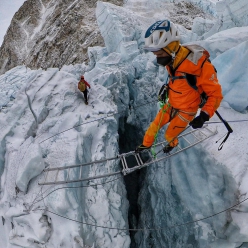 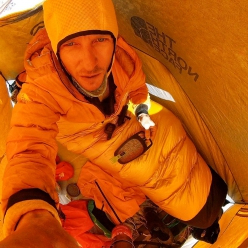 On 21 May 2022, 43-year-old German alpinist David Göttler reached the summit of Everest without supplementary oxygen. This is is sixth 8000er, after Gasherbrum II, Broad Peak, Dhaulagiri, Lhotse and Makalu.

The Everest pre-monsoon season 2022 will be recalled for its exceptional period of stable weather and almost complete absence of high winds on the summit that enabled an impressive number of climbers to reach the highest point of the earth - mountaineer and chronicler Alan Arnette estimates around 575 summits (525-Nepal (203 members of expeditions supported by 323 Sherpa), 50-Tibet), almost all with supplementary oxygen.

One of the rare exceptions is Germany's David Göttler who reached the 8849m summit on 21 May without oxygen, crowning a dream attempted twice in the past; in 2019 he turned back at 8650 meters, while in 2021 he abandoned his attempt with Kilian Jornet just below the South Col.

Currently there are no precise details, apart from the fact that Göttler is safely back in Base Camp and currently resting. The 43-year-old acclimatised carefully, first on Mera Peak before climbing up to 7900m on Everest. After waiting patiently for all the commercial teams to summit with their customers, the time came for Göttler's ascent. Fast and clean.