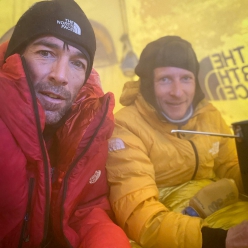 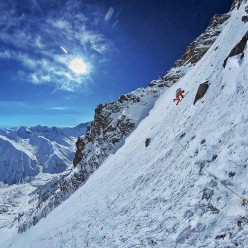 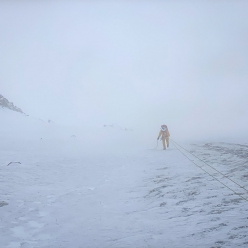 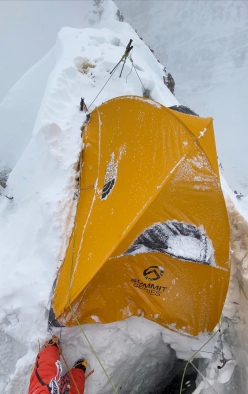 Due to the bad weather conditions the Italian mountaineer Hervé Barmasse and his German climbing partner David Göttler have called off their expedition which aimed to climb Nanga Parbat in winter.

Winter this year has been ruthlessly unforgiving on Nanga Parbat, where Italian alpinist Hervé Barmasse and his German climbing partner David Göttler had hoped to climb the immense Rupal face via the Schell route. In addition to enduring the intense cold, the climbers have been forced to deal with almost continuous snowfall. During the few spells of settled weather the duo, initially joined by US climber Mike Arnold, managed to ascend up to Camp 2 at 6200 meters, but then failed to make any further progress. The two climbed light, fast and without fixed ropes.

High winds are forecast for next few weeks, wit the jet stream settling in at an altitude of 8000 meters bringing winds predicted to reach up to 200 km/h. Hence their decision to put an end to their expedition. The first winter ascent of Nanga Parbat dates back to 26 February 2016, when via the Kinshofer route on the Diamir Face Simone Moro, Ali Sadpara and Alex Txikon managed to summit the 8126 meter peak for the first time in the harshest season, while Tamara Lunger turned back just short of the top.

Barmasse announced the decision to call off the expedition as follows: "I never regret any experience I do and certainly I will not regret this one. Believing (and still believe) that we can climb the biggest wall in the world (the Rupal of Nanga Parbat 8126 m) in winter and in a clean, light, alpine style. A style that respects the mountains and consequently mankind. Obviously, it is not easy but the limit, if there is one, is the good weather that never arrives ... And certainly are not the mental, physical and physiological abilities of humans and mountaineers who can aspire to do something better than filling up with fixed ropes our mountains that are getting full of plastic like our oceans. With David, in the few beautiful days available we climbed more than half of the face with a backpack of just over 10 kg, we felt good, more than I could have expected. Obviously, in winter it is cold, there is a lot of snow, but thanks to these characteristics, climbing is even more fascinating, beautiful and compelling. And for me, mountaineering is and will always remain this. Exploration and adventure. But now, with great bitterness, we have to say goodbye to our dream because long-term forecasts predicted the arrival of the jet stream with winds from 70 to almost 200 km/h. And as most of the times happens, after such strong winds the heavy snowfalls will resume making the wait of the last 15 days of February useless. For this reason we have decided not to postpone the end of the expedition but to keep the original program and return to Italy by the end of the month, to concentrate on the other objectives for this 2022. A special thanks to all of you who followed me, encouraged me and made me feel part of a large family, a community that loves mountains and respects them. I send you a hug from Pakistan and other posts will follow shortly with other emotions of what we have experienced in the past days."

25.12.2021
Nanga Parbat, Manaslu and Everest in winter
Winter attempts on some of the highest mountains in the world are about to begin: Hervé Barmasse, David Göttler, Mike Arnold and Qudrat Ali will attempt Nanga Parbat; Simone Moro, Alex Txikon and Rinzee Sherpa will try their luck on Manaslu; Jost Kobusch will attempt to solo Everest.