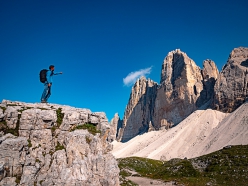 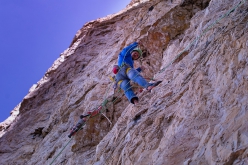 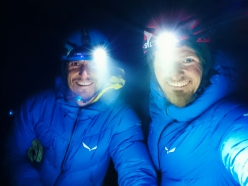 Polish climbers Jacek Matuszek & Łukasz Dudek have made the first ascent of Premiere, a big new rock climb up the North Face of Cima Grande in the Tre Cime di Lavaredo group of the Dolomites, Italy.

Jacek Matuszek and Łukasz Dudek are best known for their Alpine Wall Tour which over the years has led them to repeat some of the most difficult rock climbs in the Alps including the likes of End of Silence (Berchtesgaden Alps) Silbergeier (Rätikon), Des Kaisers neue Kleider (Wilder Kaiser) Brento Centro (Monte Brento) and Bellavista, Project fear and the one they hold in ther highest of regards, the Spanish route, all on the Tre Cime di Lavaredo, Dolomites. While gaining experience and ticking these goals off their list, the Polish climbers started asking themselves what they had not yet experienced in the mountains and quickly realised that they had never established a new route before. Rectifying this, more than anything else, was now what interested them most.

Initial trips in August 2017 to Marmolada and Taè in search of potential new lines proved unsuccessful and while flicking through the guidebook they realised that La Strada at the Tre Cime di Lavaredo, established in 1980 by their fellow countrymen Piotr Edelman and Jan Fijalkowski, lay unrepeated. Dudek & Matuszek set off to repeat the line up the right side of Cime Grande but immediately saw it was completely wet. They also noticed that the vertical face to the right was dry and that there was enough space to forge something new.

Matuszek explained "We pulled out all of our toys from our backpacks and Jacek started racking up some bolts, pitons and cams on his harness. Looking like a proper Christmas tree he cruised his way up the first easy part and reached the slab. For the first time in his life Jacek put his trust in a skyhook and after some drilling the first bolt was proudly shining on the wall. Having aided the rest of the pitch using friends, he finally got to a comfy ledge, where he installed a belay. Now it was my turn. Before entering the virgin terrain I carefully examined the skyhooks and tried them out for the first time ever. It was August 2017, exceptionally cold one, with temperatures on the wall not exceeding 10°C. We climbed in the shade most of the time, which made it even harder to warm up our hands and fingers."

Throughout summer 2017 they established six pitches that led to less demanding terrain before stormy weather stopped play, while in summer 2018 they added the remaining 6 pitches. In the meantime La Strada been repeated for the first time by Simon Gietl, Thomas Huber and Rainer Treppte, and Dudek & Matuszek carried out the first free ascent of their route on 15 August 2018, despite rain which forced them to wait for several hours at the good ledge at half-height before completing the ascent.

Talking to planetmountain.com after the ascent, Matuszek stated "Premiere starts to the right of La Strada and climbs directly upwards onto the buttress and then follows its arête. Then it reaches the good bivy ledge in the middle, from where it dives into the biggest overhang right above it and then runs to the left towards the edge to finally lead the climbers to the easy terrain below the summit. The route consists of many pitches around 7b grade requiring both solid endurance and nerves of steel. Also, after a long and exposed traverse section on the 5th pitch there is no possibility to turn back without leaving a fixed rope. This inconvenience is however counterbalanced by the above mentioned ledge two pitches higher up that allows for a moderately comfortable overnight stay."

With 9a sports climbs to their name as well as repeats of some of the hardest multi-pitch climbs in the Alps, establishing Premiere may appear somewhat bland. But Matuszek indicates that the experience was quite the opposite "We must admit that the processes of making ascents of already existing routes and opening new ones are worlds apart. Establishing a route equals gruesome slog involving a lot of pure strenuous physical effort and not so much climbing and to us it seemed more like rope access work rather than cruising up the wall. Moreover, the process is super heavy on your mind. Most of the times we called it a day not because we were tired physically but because there was no mental strength left in the tank. Nonetheless, being able to make your own decisions and accept the responsibility is way more interesting than following in someone else’s footsteps. Paving the way through the unknown is accompanied by excitement about whether climbing here is even possible. It is about believing in yourself and a long process of creation interwoven with feelings of self-doubt and question marks, everything wrapped in fear. While attempting a route, even if ludicrously difficult, the awareness of it having been done before makes the whole difference in the world. It makes you feel a step ahead because you know it can be done. Nevertheless, after many days up the wall we managed to leave our trace on Cima Grande and now it is certain – we were there first, before anyone else. Being the first changes everything."