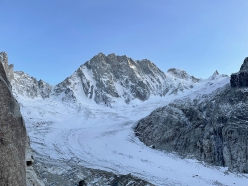 From 13 to 18 January 2022, French alpinist Charles Dubouloz completed the first solo ascent of the famous mixed climb Rolling Stones on the north face of the Grandes Jorasses in the Mont Blanc massif.

French mountain guide Charles Dubouloz has just crowned a long-cherished dream with his winter solo ascent of one of the most famous mixed routes in the entire Mont Blanc massif, Rolling Stones on the north face of the Grandes Jorasses.

Located on the Walker Spur to the left of the historic Via Cassin, the route was established in July 1979 by the Czechs Thomas Prochaska, Jroslav Rutil, Ludek Schlechta and Jiri Svejda. Due to its elevated difficulties the 1100m line was rarely repeated in summer, also because it was considered too dangerous due to rockfall. In recent times the route has received more traffic in winter; the first winter ascent was carried out by French alpinists Benoît Grison and Eric Grammond from 13 to 17 February 1984, while the first free ascent dates back to March 2014 by the Slovenian mountaineers Luka Krajnc and Luka Lindič.

Dubouloz, who last year established a new route on the virgin north face of Chamlang (7319m) in Nepal with Benjamin Védrines, climbed Rolling Stones from 13 to 18 January, with five bivouacs on the mountain before returning safely to Courmayeur, Italy. According to Montagnes Magazine that broke the news yesterday, Dubouloz endured temperatures as low as -30°C while completing the first solo ascent of the route, in the middle of winter. Dubouloz’s ascent will certainly go down in climbing history.

The Grandes Jorasses is obviously an important peak for Dubouloz who in January 2020 teamed up with Yann Borgnet to grab the first integral repeat of the Via in memoria di Gianni Comino, established on the mountain’s south face 35 years earlier by Giancarlo Grassi, Renzo Luzi and Mauro Rossi. In July 2020 he repeated Manitua (7c, 1100m) on the mountain’s north face with Simon Welfringer.