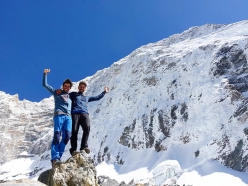 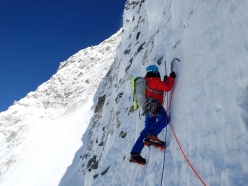 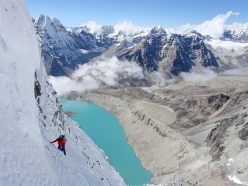 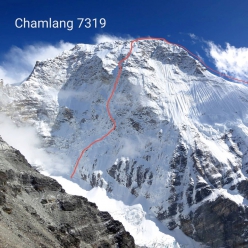 Young French alpinists Charles Dubouloz (32) and Benjamin Védrines (29) have explored an impressive, direct line up the hitherto virgin North Face of Chamlang in Nepal's Himalaya. The alluring mountain close to Makalu captured international attention in 2019 when Czech mountaineers Marek Holeček and Zdeněk Hák forged a new route up the mountain's NW Face, but the immense north face remained unclimbed. In that very same year Védrines set foot on Chamlang for the first time, when together with Nicolas Jean he made a dogged attempt of the Northeast Couloir, climbing to a foresummit at 7240m before descending.

This autumn Védrines and Dubouloz shared base camp with Damien Tomasi, Fanny Tomasi-Schmutz, Symon Welfringer and Aurelien Vssiere who hoped, but eventually failed, to climb the mountain's North Pillar. They acclimatised on Mera Peak (6476m) and Védrines and Dubouloz then set off early on the 9th of October; climbing extremely fast past steep and technical terrain, they needed just two bivouacs to reach the summit. A further bivouac was needed during the descent, down the West Ridge, to complete their standout climb and return to BC on the 12th of October.

Commenting on his IG account after the ascent, Vedrines stated "For me it was the most demanding climb I've ever done, both for the nights below the spindrift and for the pitches we had to climb. I am very happy to have succeeded with Charles, in this ambitious challenge for both of us. I return having learned from the experience and happy, happy to have intensely enjoyed the Himalayan mountains. Next time, higher surely???"