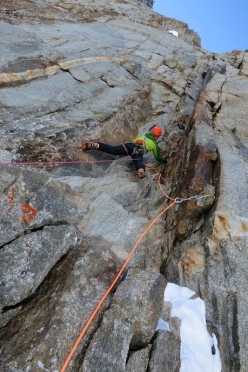 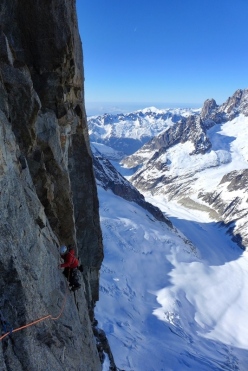 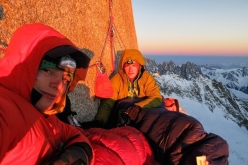 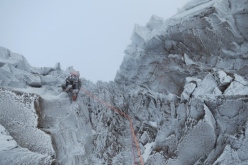 Interview with Slovenian alpinist Luka Lindic who, together with Luka Krajnc, made the first free ascent of Rolling Stones up the North Face of Grandes Jorasses (Mont Blanc), France

"Adventure! Pure alpinism" This is what the North Face of the Grandes Jorasses represents to Luka Lindič. Understandably so, seeing that the Slovenian alpinist recently carried out an extraordinary ascent up what is certainly one of the most important faces in Alps: the first free ascent of Rolling Stones together with his extremely talented climbing partner Luka Krajnc. Over a period of six days in total Lindič and Krajnc successfully onsighted the 1100m line located on the Walker Spur to the left of the Cassin route, first ascended in July 1979 by the Czech climbers Thomas Prochaska, Jroslav Rutil, Ludek Schlechta and Jiri Svejda. The route breaches difficulties up to 6a/A3 past 80° mixed terrain and since it is considered too dangerous in summer it has consequently received precious little attention; Patrice Glairon Rappaz and Cédric Perillat-Merceroz repeated the route in 2011 and theirs is believed to be only the 4th winter ascent.

In some respects the recent free ascent at the hands of Lindič and Krajnc - without a doubt two of the strongest alpinists of their generation - came about by chance. The original idea had been to repeat the route climbed by Gousseault – Desmaison to the left but shortly before setting off they found out that two other parties had the same objective, hence a quick change of plans for the more difficult Rolling Stones.

After a day spent approaching the buttress and a bivy at the base of the face, on 12 March the two set off, up into the unknown. "The second pitch already proved extremely steep and we were moving slower than planned" recounts Lindič and that evening, after having climbed 13 pitches, they dug a small ledge intio the ice and prepared for an uncomfortable night. On day two they proceeded not without difficulties "we were already tired and the steepest part was still above us. After a tricky traverse pitch into really steep ground we became totally committed to the route." Eight hard pitches were climbed until late in the afternoon, when they found a good ledge for their second bivy.

Day three turned dawned and with it the hardest technical difficulties: after two steep pitches came the crux, a delicate and dangerous pitch graded A2/A3. Luka Lindič led this and explained: "Since it did not look too daunting, I managed to calm down and just go for it. The first part was straightforward with good protection. After an old rusty bolt the pitch steepened. To add to the challenge there were three huge loose blocks, a scary proposition since we were climbing with a single rope. Somewhat scared, I gingerly climbed up and around these blocks, choosing not to place any protection for a few meters. I could hear the blocks making strange noises as they shifted. After another few very careful minutes of climbing I was at the belay. Yes! I did it!" They enjoyed their third bivy, a few pitches higher, with beaming smiles.

Up until this point everything had ran smoothly: all pitches had been climbed free and onsight and the weather had been nigh perfect. Suddenly though there was a brusque change, for they woke up the next morning in the howling wind while "a wall of clouds was barreling down upon us from the north." All of a sudden the North Face of the Jorasses began to show its teeth and undergo a complete transformation, and in less than an hour the two were shivering away, huddled in the mist while the rock became plastered in frost. "To our disbelief we were suddenly in a very serious situation. We knew that if something went wrong and we needed to stop we would in big trouble." In a race against the cold and time the two kept their nerve and managed to summit just before nightfall. They began the descent down the South Face to escape from the wind but due to the impeding darkness and the thick fog they opted for a fourth and final bivy. The next day the Mont Blanc massif proved benevolent once again and, in clear blue skies, the two descended safely to Courmayeur in Italy.

A six-day adventure, beautiful and pure. Summed up by Lindič as follows "Once again we were able to climb a superb route in our preferred style – simple with minimal gear. We made a first free ascent and managed to on-sight every pitch. We estimate that the hardest pitch is M8, with a scary section climbing over big loose blocks. At least three other pitches are in the M7 range, and several others around M6. However, and as always, numbers do not tell the whole story."

Luka: the Grandes Jorasses. What does this name evoke in you?
Adventure! Pure alpinism.

Rolling Stones wasn't your original idea. So what did you know about the route?
I've dreamt about free climbing Rolling Stones for the last five years, I got the idea from Silvo Karo who made the second repeat of the route in 1985 with Janez Jeglič and Slavc Svetičič. Luka and I thought we might need warmer conditions to do the crux pitches in climbing shoes and so since the Gousseault Desmaison route lies just to the right we thought that from there we might be able to check out Rolling Stones. When we realised though that two other parties wanted to climb the same route we decided to change plans. We really like to be alone on climbs like these and have a real adventure.

So how alone were you and did you see the others on the face?
On the first day we saw the other teams, but one got rescued by helicopter and later the other then turned back. So we were totally alone on the whole face. It was a very good feeling.

You climbed with just a single rope... how important is weight and how much gear did you take?
We took one single and one half rope. We used the half rope to haul our packs up the harder pitches and the single rope for protection. Weight is obviously very important. We didn't took a lot and so this enabled us to climb most pitches with our packs on.

Is there much in-situ pro on the route? And what about the conditions?
There is not a lot of in-situ protection. One rusty bolt on the crux pitch. The conditions were quite good. It was quite warm for winter and that's why we were able to free climb everything. Only the last day became quite challenging in the very strong wind.

Tell us more
We realised that we were in a very serious situation, but we stayed calm and focused. We've been climbing partners for ten years, ever since we started, so we know each other very well. In this kind of situation you need a partner you can really trust. We knew we couldn't stop and we didn't. And in last light of day we reached the summit. Happy!

What was the best moment of this climb?
The last meters walking back to the car. We knew that it was all over.

Reading your report, the impression one gets is that, in some respects at least, this was almost "normal".
For sure we needed to push ourselves but this is what we were looking for. We got what we wanted.

So how would you rate this climb?
I think it's one of my best ascents. M8 is not considered extreme nowadays, but for us it was really good because we didn't even know if it would even be possible to free climb the route. This uncertainty is the spice that gives pure alpinism just the right flavour.