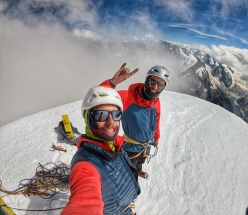 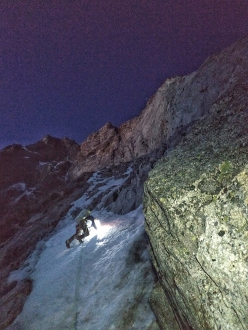 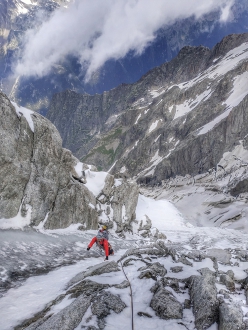 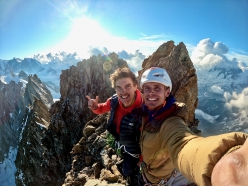 French mountaineer Symon Welfringer has had a productive July and August in the Mont Blanc massif which includes a single day, all-free ascent of Manitua on the North Face of the Grandes Jorasses.

French mountaineer Symon Welfringer spent most of July and the start of August in the Mont Blanc area, during which he managed to complete a series of important ascents. Welfringer started his month in the high mountains by repeating Le trésor de Romain (8a+/400m) on Grand Capucin with Jonathan Crison, while on the 13th of July he teamed up with Will Sim to make a one push ascent of the Direttissima Gabarrou-Long on the Pilier Rouge du Brouillard. The two required 14 hours to reach the summit of Mont Blanc and 20 to return to Les Houches.

From the 19 to 26 July Welfringer succeeded in climbing three projects of particular importance to him. During his "spicy week" he managed to climb Manitua (7c, 1100m) on the North Face of the Grandes Jorasses all free in a day with Charles Dubouloz, redpoint the 200m 8a+ multi-pitch Le grand bleu at Balme with Charles Noirot and then complete a day-push ascent of the Gabarrou-Silvy (6c, 1100m) on Aiguille Verte with Aurélien Vaissiere.

Manitua in particular stood out, as he managed to onsight all the pitches. It is likely that this is the first time the route has been climbed all free in a single day, starting from the Leschaux Hut and finishing at Rifugio Boccalatte.