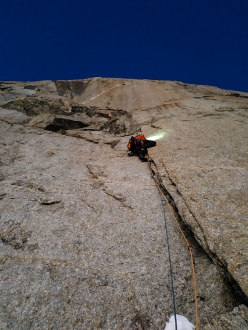 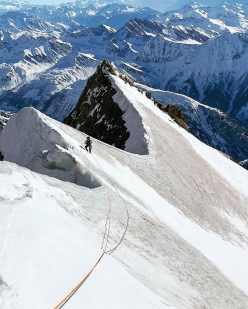 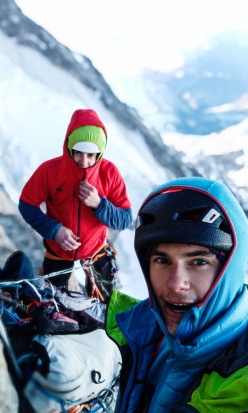 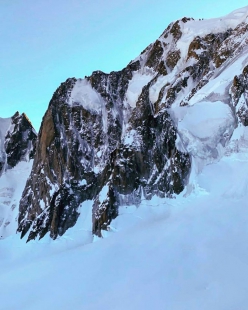 From 17- 19 February 2019 young French alpinists Xavier Cailhol and Symon Welfringer made a winter ascent of Divine Providence up Grand Pilier d’Angle, one of the most famous routes in the Mont Blanc massif.

Divine Providence on Grand Pilier d’Angle is one of the most famous routes in the entire Mont Blanc massif, established from 5 to 8 August 1984 by two of France’s leading alpinists, Patrick Gabarrou and François Marsigny. Due to its due length, difficulty and remoteness, all at altitude, its reputation is second to none. From 17 - 19 February 2019 young Frenchmen Xavier Cailhol and Symon Welfringer made a rare winter repeat of the line. Here is their report.

It’s Saturday, February 16th, noon. We park at the Mont Blanc tunnel. Grand Pilier d'Angle appears tall, imposing and at the same time so small in the middle of all these mountains. At around 15.00 we begin the approach to the Fourche bivouac. We put on our snowplaks and off we go, these little snowhoes are really light and practical for doing routes like this one. After a short night at the bivy we set off the next day at 4 am. Some abseils and we are below the Poire serac, it's time to run! At 6.00am we start climbing up the pillar at the base of Divine.

We climb long 60m pitches across mixed terrain. The large ramp that leads towards the bivouac provides beautiful mixed climbing, until the penultimate pitch immediately below the bivy which will turns out to offer poor rock. We put in a good fight to get past this unpleasant length, then we reach the foot of the shield. At the bivy I still have some energy left to fix the first pitch for the following day, a horrible 6a+ that, once climbed, enables me to have a good night.

After a good night's sleep, we set off up the shield, it is half past six and we are at the base of the first 7a. The cold is really biting and we decide to climb these pitches with a mix of free climbing and aid climbing. The leader fixes the rope at the belay, and the second jumars up with the two bags.

Despite the sun, the air is really cold. We don’t take our jackets off all day. The climbing is excellent and and it's easy to go fast with this style. Once the two 7a and 7b are dispatched with, we’re left with a 6b with a tricky pendulum and a 7a. It’s 13:00, the sun starts to leave, the already intense cold gets even colder

We mustn’t forget that Divine Providence is not just a big 12-pitch rock climb. Once all this is done, you have to join the Peuterey ridge. The cold, snow and especially the black ice slows us down and we take far longer than expected. At 20.00 we finally reach the four-star bivouac that Patrice Glairon Rappaz had recommend to us. Having limited gas reserves, we go to sleep without eating.

The next day we wake up optimistically at 6:30. We finish our last gas canister by melting some some snow and eating a little bit. We still have to ascent to the Mont Blanc Courmayeur summit. Just that. How naive we are! The ascent is completely icy, in winter it's too cold for snow to stick anywhere, and all the ridges that are snowy in summer are full of ice in winter.

We climb 100m pitches, I begin to become extremely tired but when we finally see the cornice we reckon we’re about 100m below the summit. Except that it will take us 6 pitches to get out to the top of Mont Blanc Courmayeur. We take a lot longer than we thought. By now it’s15:30. There’s is a lot of wind, we put on all the clothes we have and continue our ascent to the summit of Mont Blanc. Suddenly we’re there, the overcome with emotion. We have just climbed Divine Providence, the best route in the entire massif, in winter! But now it’s 16:00, we need to descend from 4810m to 1000m, radar mode is on!

After a good rest at the Vallot bivy we set off at 18:00 for Grands Mulets. After descending for 10 minutes, Xavier puts his foot into a crevasse. We decide to put on our snowplaks. We continue down at a good pace, to the big plateau when Xavier suddenly ends up in a crevasse. I’m outside and at first don’t even understand why he’s no longer there, the rope isn’t even tense. Fortunately he stops two meters lower thanks to snow bridges inside.

After wandering down the Glacier des Bossons, we finally return to the car at 22:30 and celebrate in Courmayeur with a great pizza. Not bad for my first Mont Blanc summit!