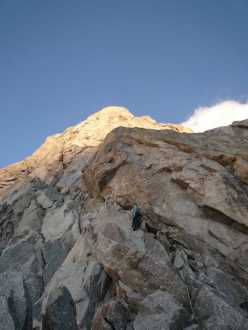 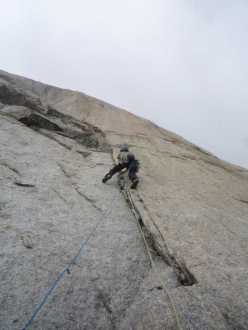 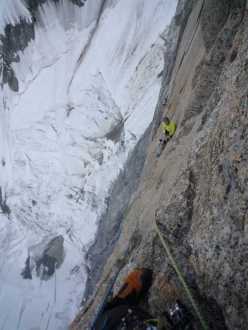 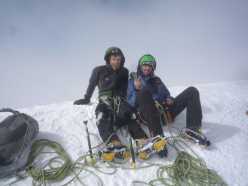 The story of the recent repeat of Divine Providence by Andrea Di Donato and Bertrand Lemaire. Established in 1984 by French alpinists Patrick Gabarrou and François Marsigny and graded ABO, Divine Providence up the Gran Pilier d'Angle was freed in 1990 by Alain Ghersen and Thierry Renault. Even today this route is a reference point within the Mont Blanc massif.

Some routes are immortal. Divine Providence up the Gran Pilier d'Angle on Mont Blanc is one of these. As we wrote after the 32-hour on-sight by Slovenes Luka Krajnc and Luka Lindic, this line first climbed in 1984 by Patrick Gabarrou and François Marsigny is an absolute masterpiece. A true manifesto of alpinism on Mont Blanc (and not only) that marked an era and that continues to fascinate and engage alpinists worldwide. For the difficulties, the altitude, and superb and wild ambient it breaches as it rises through the immense southern flank of Mont Blanc. It is no coincidence that this incredible line has remained one of the most coveted alpine outings. And it is no coincidence that its history was shaped by superb alpinists such as Alain Ghersen and Thierry Renault (3rd ascent and 1st free ascent in 1990) and Jean Christophe Lafaille (4th ascent and first solo in 1990). Add to these
the first Italian ascent (5th overall) carried out in 1991 by Luciano Barbieri, Giovanni Bassanini, Valerio Folco, Pierino Rey and Marcello Ricotti, as well as the 1992 ascent carried out by Roberto Bressan, Saverio Occhi and Paolo Tamagnini. Three young, strong and somewhat crazy aspirant mountain guides who made the first winter ascent (to the top of Pilier d'Angle). Te first complete winter ascent to the summit of Mont Blanc was carried out later that same year over a five-day period by Brendan Murphy and Dave Wills. In 1993 Alain Ghersen then made the first solo winter ascent. While this demonstrates that during its first ten years "Divine Providence" counted fewer than 9 repeats, in the ensuing years this statistic did not change all too much. So much so that route was repeated once, maybe twice a year only. These include the first on-sight carried out in 2002 by Swissmen Denis Burdet and Nicolas Zambetti and the above mentioned on-sight by Krajnc and Lindic. But regardless of all this, to comprehend the magnitude of this climb one needs to go there, to the South Face of Mont Blanc (on the Italian side therefore) and ascend up the Brenva glacier... In short, enter right into the heart of this wild mountain. As Italian mountain guide Andrea Di Donato did recently, together with Bertrand Lemaire, the 47-year-old French mathematician currently based in Rome who has rediscovered his love for climbing and alpinism on nearby Gran Sasso...

DIVINE PROVIDENCE: A GREAT ADVENTURE, there's no doubt about it
by Andrea Di Donato

Yeah, sure, let's do something beforehand... are you crazy or what? Surely you're not gonna hurl yourself straight onto Pilier d'Angle as soon as you get there from Rome, with nothing but a Monte Velino under your belt! Yeah, of course if the weather window arrives then we'll give it a go. And of course the good weather window arrives and so we set off. I've got two months of Mont Blanc climbing under my belt, Betrand nothing but Monte Velino. But he's a Gaul, has fibre, climbed on the boulders of Fontainebleau with Alain Ghersen when he was 14 years old. The life stories intertwined, the stories of those who made history. Yeah, because in 1990 legendary Alain Ghersen (together with Thierry Renault ed) made the first free ascent of mythical Divine Providence, while in 2002 he carried out the first solo winter ascent. And now it's me who often meets Alain at the guides office here in Chamonix... Salut, Ca va?!

It's a dream, this Divine is a dream, it's the Pearl of Gabarrou and Marsigny... and life stories intertwine once again; up on Tete Rousse Gabarrou gave me a magazine that included the Argentera routes, and I work with Christian Appertet, a guide from Annecy who had forged a new route up Point Margherita on the Grandes Jorasses together with Gabarrou. I talked to him about my project... this was to be my last route on Mont Blanc, followed by 10 days off elsewhere, we wanted to climb Divine P... bien bien!... the next day he brought a really lightweight bivy bag for two... he'd never used it before, but it was similar to the one he and Patrick used on the Jorasses. The material was that of a paraglider wing.

Bertrà, the Gran Pilier d'Angle will be more or less like the Farfalla on Gran Sasso! I mean, sooner or later you'll through up! Hahaha... let's just say that they're similar in theory because although things sum up, this one is far more sustained, more physical, without bolts and with two thousand metres that head skywards.

Amazing avalanches at the foot of Pilier d'Angle. Upon entering history, us two little men stop and listen. The Brenva, the Major, Sentinella Rossa, Pera ... the Wild Side! Finally Col Moore.

Bert's intuition leads us, after a short pitch, to a comfortable ledge and our bivy. The Frenchman is excited, talks all through the night... one of the few nights out in the open during which the mild temperatures would have allowed me to catch some sleep ...

Before departing we'd said: "we'll buy a brand-new single rope"... but how long? 50 or 60 metres? We ended up with 55! We wake up next morning and, poised and ready to go, we suddenly discover that a section of the rope is fucked! We cut off about 8 meters = 47m lift... Perhaps it happened during the abseil off Col Moore? who knows... what's certain though is that we'll climb very cautiously indeed.

We ascend the pedestal pretty quickly, the climbing is never too difficult, but the rock isn't great and our rucksacks aren't all too light, making things not particularly fast. Having said that, after about 6 hours we're below the orange shield! From here onwards it's Big wall mode, hauling up our sacks... time to climb light!

With hindsight, a poetic sacrifice makes me take the most important decision of all. I know he can do it, because he's a fucking champion, genetically modified, because he has gigantic hands and the sternum of a gorilla, his arms are as long as mine even though he's much shorter than me. I take a look at the first hard pitch, it should have been mine, and I could already see myself resting on a peg, trying to place a microfriend! No, you give it go, you're the rock poet, you give it a shot since you're capable of realising this dream! And he sets off, not as convinced as we'd both thought, he hesitates, thinks twice, but in the end sends it, onsight... But if this is the easiest pitch, what the fuck will I do later he exclaims!... You just needed to get into the flow Bert, now you're warmed up!

A great pitch of classic alpinism leads to the base of the large corner. I belay Bert. We're in the heart of the route. Another hard pitch awaits, he sends it, onsight. Now we're below the crux, within an uncomfortable niche, directly below a vertiginous overhanging crack, slightly wet and at first sight not particularly solid!

The Frenchman now says something which he then does: "I'm going to give this pitch everything I've got, all my forty years of climbing!" He who starts up this pitch is now another person, no longer the pensive climber from beforehand, but a proud and determined being who skips pegs, does head-high step-ups. His foot skids on a wet section, he places a final Friend and then the crack improves. But its tremendously physical, a massive run-out leads to the final wedged block that saves the day! Wow!... What a climb, God this is exciting!

I follow him to the belay and with exploded forearms keep repeating: you're not normal! You're not normal ... and we're happy! A couple more classic mountaineering pitches lead to the awfully nasty roof that the Frenchman breaches easily with the last remains of explosive energy!

14 hours of climbing, bivy, wonderful view onto Mont Blanc... three in the morning, we set off, in the fog, tired, slow but safe... dawn, Peuterey, long, the track already beaten (we later discover by great Profit). Bertrand is completely spent, I'm exhausted, I discover a pain that the Blanc routes never train you for, but at least I'm acclimatised! Wind and fog... no end in sight. Bert asks me how much more we still need to climb and, just like with children, I tell him we're almost there but in truth I have no idea, all we can see is thick clouds up above. Mont Blanc de Courmayeur, Bert sees the summit from Bozzo and throws up out of excitement! What a heroe, what a legend! Divine Providence free and onsight… wow! Bertrand Lemaire, escaladeur de reve!