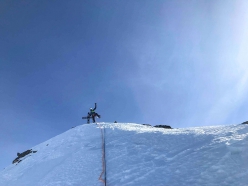 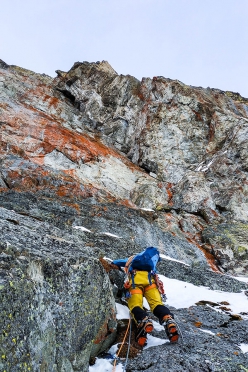 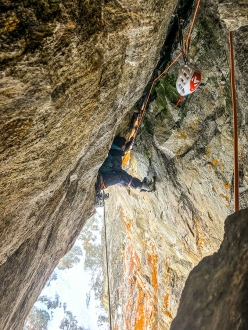 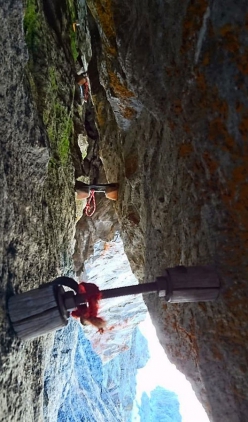 Symon Welfringer and Xavier Cailhol have completed what is likely to be the first free winter ascent of Dièdre Rouge up the NE Face of Corno Stella (Maritime Alps).

At the end of December 2018 Symon Welfringer e Xavier Cailhol made what is likely to be the first free winter ascent of the famous Dièdre Rouge up the NE Face of Corno Stella (3050m). The route, a legend in its own right in the Maritime Alps, was first ascended from 11 to 13 June 1962 by French alpinists Franck Ruggieri and Didier Ughetto who, after a series of failed attempts, used a series of ingenious homemade wooden wedges to breach the fearsome roof that caps the climb. The wedges, many of which are still in-situ, were adjustable in size up to 30 cm and produced a decade before Ray Jardine invented his revolutionary Friends...

Graded V/A3, Dièdre Rouge was immediately recognised as one of the hardest multi-pitch climbs in the region. Gianluca Bergese, co-author of the guidebook Corno Stella, explained that even nowadays the line is an interesing test, so much so that it's a curriculum climb for aspirant French mountain guides.

While the first winter ascent was carried out from 23 - 25 December 1971 by Jean Gounand and Georges Grisolles, it was the late Patrick Berhault who really left his mark on this climb: after repeating the route aged only 15, he carried out the first free ascent in 1994 together with Arnaud Boudet, Franck Ghini and Olivier Giroud past difficulties up to 7a+, before carrying out the first solo ascent on 6 September 1996 and completing the first solo winter ascent on 17 January 2001 during his famous traverse across the Alps.

The climb has obviously been repeated in winter by other parties, yet it appears to never have been climbed all free during the coldest season of the year. Welfringer and Cailhol made their way up to the Rifuguo Varone hut on 22 December and, capitalising on the unseasonably warm weather and dry conditions, repeated the line in 6 hours the next day.

"We chose this route because it's really steep and doesn't get a lot of snow during winter." Welfringer told planetmountain.com, adding "The bottom of the route was in good condition for mixed climbing, and the hard part was completely dry so we put on our climbing shoes and even used our chalkbags! When we reached the base of crux pitch we had managed to free climb everything below, so I certainly felt some pressure as I started up the crux. It's a huge crack, more like an offwidth that can only be protected with Camalots 6. At the start of the pitch I clipped my helmet to a quickdraw in order to enter the crack; it reminded me of when I did the famous Harding Slot on Astroman in Yosemite, crawling slowly all the way to the top!"

28.10.2016
Ray Jardine's Friends, a teacup and a blue bag
Maurizio Oviglia recalls the invention of the Friend, the revolutionary camming device invented in the 1970s by the America’s Ray Jardine. A fun story that retraces an important moment in the history of rock climbing.
29.04.2004
Patrick Berhault dies in the Alps
At 11.30 yesterday morning Patrick Berhault died while climbing towards the summit of 4545m high Dom de Mischabel together with Philippe Magnin.