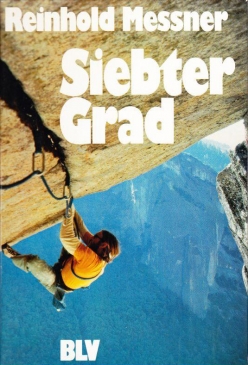 Ray Jardine in 1977 making the second ascent of Separate Reality in Yosemite. This famous photo was used on the front cover of Reinhold Messner's book the 7th grade and also on the cover of the British magazine Mountain, and inspired generations of climbers.
Photo by Ray Jardine archive 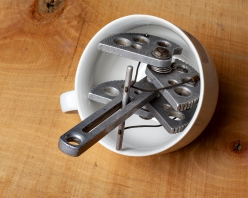 Ray Jardine's Friends, a teacup and a blue bag

Maurizio Oviglia recalls the invention of the Friend, the revolutionary camming device invented in the 1970s by the America’s Ray Jardine. A fun story that retraces an important moment in the history of rock climbing.

If many of us consider climbing far more than just a sport, it is because its history is not merely an arid list of dates and numbers but, instead, filled with inspirational climbers and the ideas that have helped shape this activity into what it is today. Of course, you can climb without knowing anything about climbing’s history, but as always the "culture" that embraces our outings on rock climbs and up in the mountains is what makes this sport so unique. Although hundreds and hundreds of books have been written about climbers, or about the ideas that led them to do achieve certain feats, there are thousands of anecdotes or facts that have never been written about, and that continue to be handed down from one generation to the next by word of mouth. Every now and then they appear in a comment on a social network or in a particular forum, maybe they’re read and bring a smile to someone’s lips, but unfortunately they’re destined to disappear…. Maybe some of these stories are nothing but legends, but they certainly fuel people’s dreams and nurture their love for this sport. I, for example, read one of these stories a few months ago, but in all honesty I simply cannot remember where I read it and even google failed to deliver the goods. All I know is that the story made me smile…

Who invented the Friend? Well, that’s an easy one, it was Ray Jardine, the American climber famous for his numerous first ascents above all in Yosemite. One of these happens to be The Phoenix, a fearsome finger crack high above the Upper Cascade Falls; did you know that this was probably the first 5.13 in the world? For those who don’t have the grade comparison table at hand, this translates into a ‘near’ 8a. And that was back in 1977… it makes me shudder to think that this degree of difficulty had been reached in America back in those days and, for the record, on trad gear… Many still believe that the first to climb this hard were the French, in the '80's, thanks to the appearance of bolts! But Jardine achieved this remarkable feat thanks to Friends, his revolutionary invention that finally enabled him to quickly protect his ascent up those parallel-sided cracks.

Jardine was an aerospace engineer and even today you can visit his website, chockablock full of inventions of all types, shapes and sizes. Inspired by the Cam Nut that Greg Lowe had invented in 1973, Jardine began to further develop a similar device he had already begun designing in 1971. He then took his prototypes to Yosemite to test them in great secrecy and in 1974 he used them during his attempt at a single-day ascent of The Nose, and he also made the first repeat of the famous off width roof crack Separate Reality (freed by Ron Kauk, Ed). The photo of this ascent later graced the cover of Reinhold Messner’s book "The 7th grade".

But where did Friends get their name from? Jardine hid his prototypes in a blue bag and only took them out when he was sure no one nearby could steal the patent. Word has it he was obsessed by this worry (perhaps rightly so). One day though there were simply too many people at the base of the cliff, yet Ray still wanted to climb. And so his climbing partner Chris Walker simply asked him: "have you got the bag of Friends, Ray?" alluding to the content in the blue bag…. And ever since then, this is what these strange cams are called.

Not many know though that Jardine failed to find someone in America who was willing to patent and produce his Friends (the Lowe brothers never did) and so, after several frustratingly unsuccessful years, Jardine joined forces with Britain’s Mark Vallance who in 1977 founded Wild Country, the first company to build and sell the revolutionary "Friends".

But let’s get to the anecdote I read a while back and which inspired these few lines ... In the early days many Yosemite climbers were skeptical about the effectiveness of new invention. One day some of the most famous climbers were hanging out at Camp 4 when Jardine arrived. Many raised their doubts about the new piece of gear and Jardine, in response, placed a Friend in the teacup of one of his skeptics and said, "now try to get it out without pulling the trigger!"

I gave my first rigid stem Wild Country Friend, bought at the start of the ’80’s when they first appeared in Italy, to a friend of mine. So I had to phone him and ask him to place it into a teacup to take the rather unusual photograph on the left…