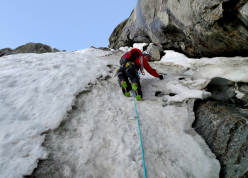 On the first pitches of Divine Providence
Photo by Luka Lindič 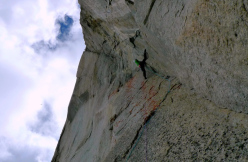 The steepest section of the wall
Photo by Luka Lindič 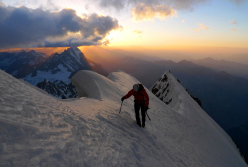 Young Slovenian alpinists Luka Krajnc (25) and Luka Lindič (24) have made a swift on-sight ascent of Divine Providence up the east face of Grand Pilier d'Angle on Mont Blanc. The circa 900m line had been first ascended in from 5- 8 July 1984 by Patrick Gabarrou and François Marsigny and graded ABO, and then freed in 1990 by Alain Ghersen and Thierry Renault and famously soloed for the first time by the late Jean Christophe Lafaille that same winter.

Reputed to be one of the hardest routes in the Mont Blanc range, Divine Providence was first on-sighted in 2002 by the Swiss duo Denis Burdet and Nicolas Zambetti and while the free grade has settled down to 7b+, the 900m line remains an outstanding outing, one of the most coveted undertakings in the Alps. Krajnc provides the details.

The steep Grand Pilier d'Angle face was in our thoughts for quite some time and Divine Providence, that cuts straight through the centre, was the obvious choice that promised a great experience.

On Wednesday we took the cable car to the Torino hut and walked 2.5 hours to the Fourche bivouac. We spent the night there and at around 1am we started walking towards the face. The approach went faster that planned so it was still dark when we reached the base of the mountain.

We started climbing in the dark and as a result we started up the wrong corner but soon joined the route a few pitches higher. Because of this year's abundant snow fall the starting pitches offered sometimes delicate mixed climbing that slowed us down, instead of the relatively easy rock pitches.

After reaching the main section of the route things went smoothly and we climbed all the pitches onsight/flash, exchanging leads. The last physically difficult pitch (the 7a roof) was wet, but luckily not icy and we exited the rock at around 10pm when it got dark. The following pitches took a lot of time because we were not properly aclimatised and conditions were not the best, but we continued climbing through the night towards the ridge.

At around 3am we stopped for 30 minutes to melt some snow and then continued towards the Peuterey ridge, via which we reached the summit of Mont Blanc just before 9am in wind and fog. We descended to the Vallot bivouac on the French side where we rested for an hour and then we walked 4 hours back down into the valley. In total we needed 32 hours from Fourche bivouac to Vallot bivouac.