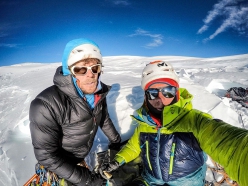 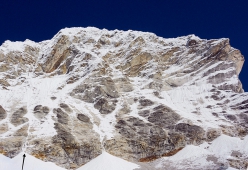 A French / Swiss team comprised of Silvan Schüpbach, Symon Welfringer and Charles Noirot has climbed a difficult new route up the West Face of Tengi Ragi Tau in the Rowaling Himalaya in Nepal. Climbing alpine style from 26 - 29 October 2019, Schüpbach and Welfringer ascended their Trinité (1400m, M6, AI 5) to the mountain’s north summit.

On 8 October 2019 Charles Noirot (FRA), Symon Welfringer (FRA) and Silvan Schüpbach (SUI) established Base Camp next to the Trakarding Glacier at 4700m, aiming to breach the unclimbed West Face of Tengi Ragi Tau. However, during their acclimatisation they observed Tino Villanueva and Alan Rousseau as they successfully made the first ascent of the West Face and, as a result, the French / Swiss team opted for a different line further north, up an obvious gully to the left but still on the same wall, that would take them to the slightly lower north summit.

On 16 October they completed their acclimatisation phase and returned to basecamp, unfortunately though Noirot fell ill and was unable to climb for the rest of the trip. During the next few days Schüpbach and Welfringer made a foreshortened attempt that was abandoned due to snowfall and high winds.

On 26 October the duo finally set foot on the wall. Day 1 included two pitches of steep ice, followed by moderate snow and ice slopes up to 60°. The climbers established camp on a small ledge at 6100m. Up to this point, the cold, wind and spindrift had made conditions demanding.

On day 2 the weather improved but as the face steepened the pitches became more technical and the thinner air slowed progress. The two climbers had trouble finding a suitable bivy spot but succeeded at dusk. Settled now in a good position at 6450m, on day 3 they left their bivy gear behind and started their summit push. The hardest but also most interesting pitches were encountered above the second bivy. Steep ice, technical mixed climbing and ice flutes led the two climbers to the north summit, which is, according to their altimeter readings, 6820m high. At present it is unclear whether this was the first time the north summit has been reached.

In any case the duo decided not to proceed to the main summit, circa 2 hours and 100 vertical meters higher, but instead they took out their headlamps and abseiled back to the bivy, while on day 4 they rappelled the remaining 1000m to the base. Schüpbach and Welfringer returned safely to BC the day before the end of the expedition.

05.09.2019
Risht Peak first ascent in Pakistan's unexplored Yarkhun valley
Symon Welfringer reports about an expedition with fellow French mountaineers Aurélien Vaissière, Pierrick Fine and Antoine Rolle to Yarkhun valley in Pakistan which resulted in the first ascent of Risht Peak (5960m) right at the end of the Risht glacier.