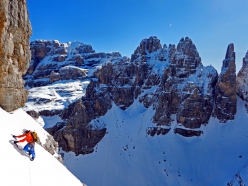 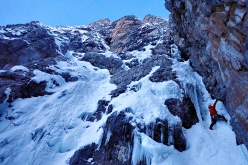 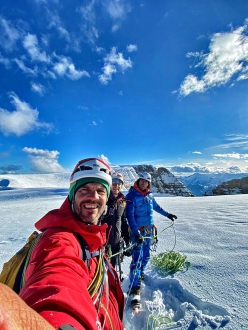 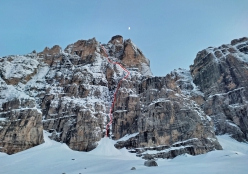 Emanuele Andreozzi, Matteo Faletti and Santiago Padrós have made the first ascent of Pazzione Primavernale, a new winter climb up the NNE face of Cima Tosa in the Brenta Dolomites.

Winter finished a long time ago and actually, according to the official calendar, the start of summer is just a few days away, yet at altitude the mountains are still laden with snow.

Taking advantage of these unexpected conditions, Emanuele Andreozzi, Matteo Faletti and Santiago Padrós have now established a big new route on the NNE Face of Cima Tosa in the Brenta Dolomites. This follows the Castiglioni-Detassis through the lower section of the face and then, at about half height, traverses leftwards and crosses Via Piaz before heading straight up the huge chimney. Difficulties are in the region of AI6 and M7 and writing on Facebook Andreozzi described the line as "a lifetime isn’t long enough to dream of this thousand meter gully."

The route has been called Pazzione Primavernale and Andreozzi shared the first details "At about two in the morning of Thursday 20 May we left our tents and half an hour later we started the route following the beams of our head torches. Inside the impeccable gully one pitch of steep alpine ice followed the next; the climbing was like a dream come true, but the overall commitment was high. The climb becomes tough again. We emerged on the large summit plateau after 19 pitches and sixteen and a half hours of climbing up the face."

This is the first time that the three have climbed together and, judging by Andreozzi’s words, it certainly won’t be the last: "What we experienced was simply incredible, perhaps unrepeatable. The true essence of the climbing partnership, of mountaineering and friendship. Simply THANK YOU. "

The trio left no gear in-situ, while on four they stumbled across the remains of an old belay stance and a piton, "probably dating back to a previous attempt or a summer route." More details will follow in due course.

The snowfield before the large chimney