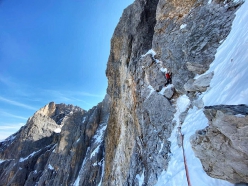 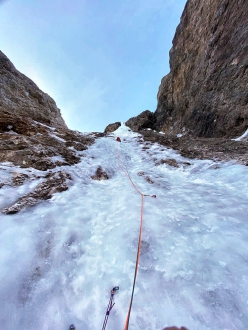 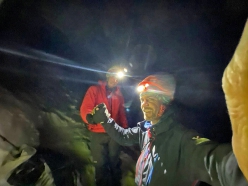 Emanuele Andreozzi and Matteo Faletti with the feet firmly on the ground after the first ascent ofElements of Life on the north face of Cimon della Pala, Pale di San Martino, Dolomites
Photo by Matteo Faletti 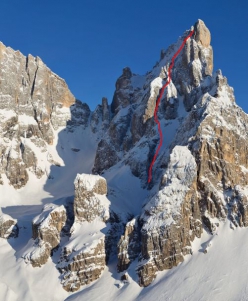 Elements of Life on the north face of Cimon della Pala, Pale di San Martino, Dolomites, climbed on 01/04/2021 by Emanuele Andreozzi and Matteo Faletti. The photo does not depict current conditions.
Photo by Matteo Visintainer / Geo360.it

Alpinists Emanuele Andreozzi and Matteo Faletti have made the first ascent of Elements of Life (900m, AI5/M6), a spectacular mixed climb up the north face of Cimon della Pala in the Pale di San Martino group of the Italian Dolomites.

Italian alpinists Emanuele Andreozzi and Matteo Faletti have climbed a darting line up one of the most famous peaks in the Dolomites, Cimon della Pala in the Pale di San Martino group.

The new route tackles a direct line up the mountain's north face, following for the first 100 meters the icefall climbed on 24 January 2020 by mountain guides Patrick Gasperini and Flavio Piccinini with Tiziano Vanzetta, before continuing for another 800 meters across new terrain.

Writing on Facebook, Andreozzi commented "We followed the weakest and most logical line up the face. In the Dolomites this is perhaps only possible in winter because in summer the available space for this style of climbing - which quests for the line of least resistance - was taken decades ago."

"The 900 meters of virgin terrain surprised us, providing us with a very beautiful and varied climb: vertical ice, lots of mixed climbing and a spectacular and sharp cornice halfway up the route. The ice conditions were exceptional; the face never gets sun and at this time of year, even when it's hot elsewhere, a microclimate forms on the north faces keeping temperatures well below zero."

Andreozzi and Faletti left only just one piton in-situ, on the M6 ​​pitch, while on the descent they equipped all the abseil stations, with only the first rappell following the line of ascent. More information will follow in due course.

12.03.2019
Cimon della Pala: Giuseppe Vidoni and Gabriele Colomba forge new mixed climb in Dolomites
On 24/02/2019 Giuseppe Vidoni and Gabriele Colomba made the first ascent of Via degli Allievi up the north face of Cimon della Pala. About 700m high and with difficulties around AI5 M4, this is likely to be a new mixed climb in the Pale di San Martino group in the Dolomites