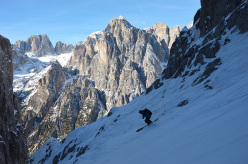 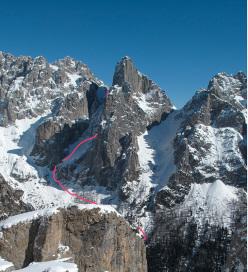 It seems almost impossible that there are still some little known descents in the Pale di San Martino group since this area is highly popular with mountaineers and climbers all year round. And, better still, that these descents are neither extreme nor contorted with long approaches... It seems impossible, but it's true, there really are some little known descents that are both logical and direct and lie close to Rifugio Canali, such as Canalone Sant'Anna, reached by following the summer path that leads to the North Face of Sass d' Ortiga.

Last winter, while skiing down Vallon delle Lede, we noticed that it might be possible to ski down Forcella Sant’Anna into Val Canali. A few weeks later Leo tried the line alone by ascending the slope in Val Canali but, instead of following the instructions of the hut warden, he chose the wrong route and reached the gully direct and failed to take into account the 20m vertical drop at mid-height.

On his second attempt he was joined by myself and our friend Bruno and on Sunday 1 December, after last month's heavy snowfall, we set off from the Menegazzi bivouac full of enthusiasm but without the rope that we'd forgotten in the car. As a result we were forced to turn back due to an exposed and frozen traverse half way along the route.

On our third attempt and this time finally with rope, hammer and pegs we reached the point where we'd retreated and we equipped a short, 10m traverse, and the skied this great descent all the way through Val Canali and back to the parking lot.

Ours certainly wasn't the first ski descent but this is certainly a nice and demanding ski mountaineering itinerary in a practically unknown area that deserves checking out.

N.B. This report forms part of a project to document the ski mountaineering and freeride itineraries in the Pale di San Martino di Castrozza area, the Vette Feltrine and a small section of the Lagorai massif.