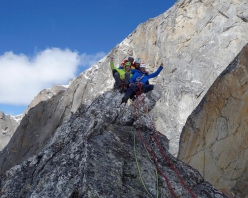 Alexander Blümel, Much Mayr, Peter Mühlburger and Matthias Wurzer on the summit of Raldang Spire in Baspa Valley in India after having made the first ascent of Baba Ji
Photo by archive Matthias Wurzer 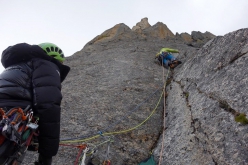 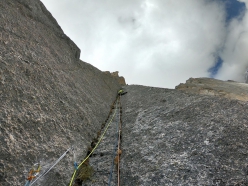 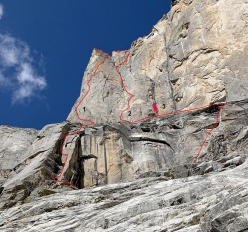 In October 2019 an Austrian expedition comprised of Alexander Blümel, Much Mayr, Peter Mühlburger and Matthias Wurzer made the first ascent of Baba Ji on Raldang Spire in the Baspa Valley, Kinnaur, India. Mühlburger reports.

The idea behind this route came originally from Hansjörg Auer and Much Mayr. In 2018 the two had hiked up to the base of the Raldang big wall while on an expedition that netted them the unnamed 6050m peak above the village Sangla. Their plan was to return one year later and give this line a try as their main objective. Both were mentors of the Young Alpinist Group in Austria - a two year program for young motivated climbers who get to widen their skillset and have some great adventures with some of Austria’s best alpinists as mentors.

As this would be my second year in the program, one of the mentors, Matthias Wurzer, and I planned to extend our stay for some additional climbing in the remote Kinnaur valley. Hansjörg and Much for their part were looking to return to their objective. Sadly in April 2019 everything changed drastically with Hansjörg’s passing, along with Jess Roskelley and my best friend David Lama in Canada while climbing Howse Peak.

Luckily one of Hansjörg’s best friends and climbing partners, Alexander Blümel, decided to join Much, Mattias and myself so we could continue the plans in honour of our friends. During the first three weeks the team, which included Domenic Barbist, Julian Gahbauer, Magdalena Hofinger, Tobias Holzknecht, Hannes Wechner and Simon Wolsegger, made some cool first ascents around the plateau above Rackcham with the mentors. We were really lucky with the weather and the good climbs this area had to offer. It was the perfect ending to our two year program.

After the rest of the young alpinists returned to Austria, my three mentors and I started the second part of the trip, focusing on Raldang. With the support of some locals and porters we started to carry our heavy loads towards the base of the mountain. In total it took us five days to get all the gear to the start of the actual climb, where we set up 2 portaledges.

The main wall looked too blank for us to free climb. It had received its first ascent 2011 by Silvia Vidal in an impressive style, but our focus was more on free climbing so we switched our attention to Raldangspire on the left side of the wall. Much had originally got this idea on his previous trip, back then though it was too foggy to see the main wall properly. The small glimpses of the wall confirmed his initial intuition, that the big wall is pretty blank. So one line on the spire immediately caught our attention. This spire is left of the line attempted in 2015 by the Americans Quinn Brett, Whitney Clark and Crystal Davis-Robbins.

For two days we fixed lines, returning to the portaledges to sleep. On the third day, October 11, we reached the top of the spire. Most of the belays have one, and some have two, 8mm bolts. In addition to those, we placed three more bolts on the climb. We left most of the pitons and beaks in place. The climbing varied from thin to wide cracks, plus technical face climbing, sometimes better than expected. We named the route Baba Ji (500m, 17 pitches, 7b). On some pitches the rock requires more cleaning.

We began the climb in cold conditions, one day earlier than Matty Hong, Jacopo Larcher, Matteo Mocellin and Siebe Vanhee, with whom we had made our first carry to the base of Raldang. They chose a line over to the right, avoiding the first steep section of the pillar (our first five pitches) via a large ledge system, then climbed into a dihedral that started around 100m to the right of the top of our pitch 10. In the end, it was a perfect way to remember our friends and graduate from the Young Alpinist program.

02.11.2018
Hansjörg Auer: Indian 6000er ascent video
The video of mountaineers Hansjörg Auer, Max Berger, Much Mayr and Guido Unterwurzacher and their ascent of a previously unclimbed 6050m peak in the Indian Himalaya.