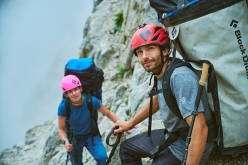 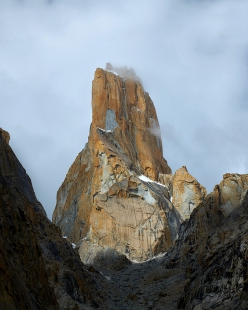 The magnificent The West Face of Nameless Tower, also referred to as Trango Tower, Karakorum, Pakistan. Eternal Flame runs up the right skyline of the tower, which is actually its south buttress, and was first ascended in 1989 by Kurt Albert, Wolfgang Güllich, Christof Stiegler and Milan Sykora. The first ascent of Trango Tower was carried out in 1976 by Mo Anthoine, Martin Boysen, Joe Brown and Malcolm Howells.
Photo by Paolo Sartori / Black Diamond 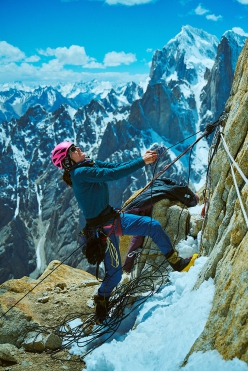 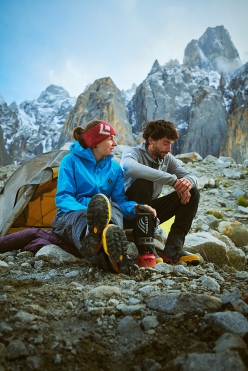 Eternal Flame on Nameless Tower (6251m) in the Trango Tower range in Pakistan has been repeated free by Barbara Zangerl and Jacopo Larcher. Zangerl is the first woman to complete a free ascent of what is regarded as the hardest and most beautiful big wall free climb at altitude in the world.

Just a few days after Edu Marin's resolute repeat of Eternal Flame, on Saturday the 23rd of July 2022 Barbara Zangerl and Jacopo Larcher also succeeded in free climbing the coveted line up the south face of Trango Tower (6251m), also referred to as Nameless Tower in the Trango Group of Pakistan's Karakoram range.

Much like Marin, Zangerl and Larcher had attempted the big wall last year but were shut down by bad weather almost immediately. This year they travelled slightly earlier and, importantly, they got lucky with the weather.

From July 18th to July 23rd the the pair spent 6 days on the wall, managing to free climb each of the 24 pitches in a continuous push. Interestingly, they climbed without a single fall and all of the pitches were climbed onsight, except for the first two which they had onsighted in 2021 before the storm rolled in.

As usual on hard big wall climbs, Zangerl and Larcher swung leads on the easy pitches, and both led the four hard crux pitches (7c-7c+). Over the six days they slowly worked their way up the wall, free climbing each pitch consecutively. On day 2, 3 and 4 they made limited progress due to the warm sun melting the snow and ice, causing the route to become wet. They chose to be patient and were rewarded with good conditions on day 5, leaving just 3 easy pitches to climb on the final day, before they stood on the summit.

The pair are currently on the way to Skardu but stated "Eternal Flame – A Dream came true! An incredible line through the stunning 6240m high Trango Tower. A sequence of 5 star pitches which we’ve rarely seen before, with the crux pitch being above 6000m. What a journey! We are both exhausted and baked by the sun, but we’re super happy to have climbed this iconic line, without any falls. Now it’s time to recover in Basecamp and enjoy our last days in this beautiful country. Big congrats to Edu, for also realising his dream!"

First ascended by Kurt Albert, Wolfgang Güllich, Christof Stiegler and Milan Sykora in 1989, Eternal Flame is regarded as the hardest and most beautiful big wall free climb in the world. Originally graded VI, 7b+, A2, the 650m line pioneered new difficulties in Himalayan mountaineering and free climbing the entire route soon became a coveted challenge for many of the world's best. Bad weather mixed with altitude however thwarted most attempts. Significant advancements were made by Denis Burdet, Nicolas Zambetti and Toni Arbones who solved part of the puzzle in 2003 when they freed two of the four aid pitches, while Spanish brothers Iker and Eneko Pou made further headway in 2005 when they explored an 8a variation to the crux 10th pitch before retreating due to poor weather.

Precisely 20 years after the first ascent, Thomas and Alexander Huber pulled off the coveted first free ascent in 2009 after having discovered a new crack system to the right of the Pou variation which enabled them to summit. The German brothers graded the route 7c+ and described the line as "the best and most beautiful free climb on the globe."

Zangerl has now made the first female ascent of route and her success consolidates her standing as one of strongest and the most versatile climbers of her generation.

NAMELESS TOWER
Nameless Tower, or more simply known as Trango Tower, was first ascended in 1976 by the British climbers Joe Brown, Mo Anthoine, Martin Boysen, and Malcolm Howells after an epic unsuccessful attempt the previous year. Mo Anthoine and Martin Boysen reached the summit on 8 July while Joe Brown and Malcolm Howells summited the next day in worsening weather. The British route was graded VI, 5.10 A2, 1100m with circa 80% climbed free - at the time it involved some of the hardest rock climbing ever achieved at altitude. The Tower received its second ascent 11 years later by a Yugoslav team led by Slavko Cankar.

29.09.2010
Kurt Albert is dead. Goodbye to a climbing legend
German climbing legend Kurt Albert died yesterday at 20.45 aged 56 following the accident last Sunday on a via ferrata in Bavaria, Germany on Sunday.
05.11.1998
Eternal Flame repeated on the Trango Towers
The famous route Eternal Flame, established by the Germans Wolfgang Güllich, Kurt Albert and Co up Nameless Tower (TTrango Towers - Karakorum) has been repeated by a Spanish expedition.