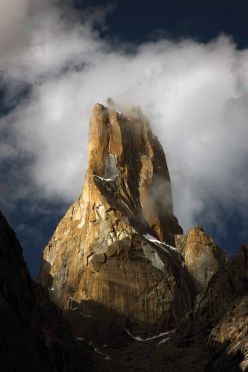 The West Face of Nameless Tower, also referred to as Trango Tower, Karakorum, Pakistan. Eternal Flame runs up the right skyline of the tower, which is actually its south buttress. The first ascent of Trango Tower was carried out in 1976 by Mo Anthoine, Martin Boysen, Joe Brown and Malcolm Howells.
Photo by Hinterbrandner / Huberbuam.de

On 30 July at 16:00 David Lama, Peter Ortner and Corey Rich reached the summit of Trango Tower in the Karakorum via the route Eternal Flame.

Yesterday at 16:00 local time the two Austrian alpinists David Lama and Peter Ortner and American photographer and alpinist Corey Rich set foot on the 6251m high summit of Trango Tower in the Karakorum, Pakistan. The three reached the top by ascending Eternal Flame, the famous route established in 1989 by the Germans Kurt Albert, Wolfgang Güllich, Christof Stiegler and Milan Sykora originally graded VI, 7b+, A2 and then, after numerous attempts, finally freed in 2009 by Alexander Huber and his brother Thomas with difficulties up to 7c+.

Despite being an extremely talented trio, Lama, his habitual partner Ortner (who was with him during the astounding first free ascent of the Compressor Route on Cerro Torre last January) and Rich couldn't be taken for granted. Located well above 5000m, the route conditions combined with the altitude play a fundamental role in the outcome and just a few days ago Lama confided that success looked unlikely.

Making the most of a short weather window, the three decided to try their luck; setting off from the famous sun terrace they reached the summit 10 hours later, climbing mostly free but resorting to aid in some sections. Rich began to show signs of altitude sickness and the trio then abseiled off, reaching the bivy on the terrace towards evening. "It was really difficult" commented Lama after the ascent and both he and Ortner will now remain in Pakistan to attempt Chogolisa (7668m).