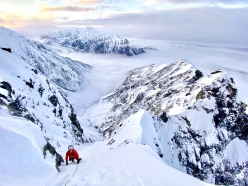 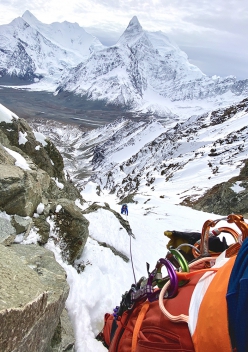 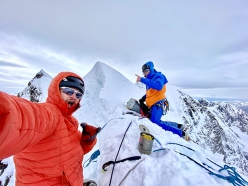 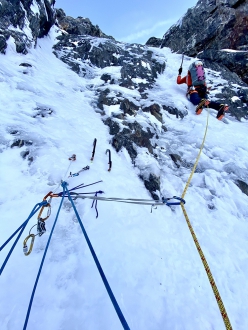 Benjamin Lieber reports about two big new climbs ascended in Alaska’s Hayes Range: DeWilde Style (800m AI4+) up the SE Face of Peak 9,250ft with Alex Hansen and Longing For Light (700m AI5) on the NE Shoulder of Mount Moffit climbed above the Trident Glacier with Hansen and Austin Schmitz.

As summer came to an end I began wondering about conditions in the high mountains above the Lodge at Black Rapids, my current residence, in Alaska’s Hayes Range. I watched the weather and checked in on forecasts. Eventually I felt like it might be a great opportunity and so I invited up my expedition partner Alex Hansen to see what we could find. Maybe it would be a flop, we weren’t sure. In mid-September we hopped in a bush plane for a recon flight with pilot Jesse Cummings of Golden Eagle Outfitters in Delta Junction. For two hours we weaved through the mountains in awe of our surroundings. The flight in itself was an incredible memory. We traveled up close against nearly every major face! During the ride we spotted two faces we wanted to try climbing on. They had immense amounts of fresh ice and with the snow yet to settle in down low in the valleys, they looked very inviting.

When we landed, we instantly went to work on a logistics plan and kit to get us to the bottom of one of the faces and climb. We eventually decided on chucking our bags out of the small bush plane below the face and then hiking up to them. This was for a few reasons. A). We didn’t want to carry it all and show up tired to the mountain. And B). The plane can’t land close by because there is no snow. Instead we used a Tundra landing strip in a riverbed 7 miles down valley. Two days later, after waiting for good weather to arrive, we drove back to Jesse’s hangar and I hopped in the two-seater plane with Jesse to head off to the Gillam Glacier. Speeding into the valley, we lined up a basecamp and dropped a big duffel from the plane and it tumbled in the Tundra. What a wild experience to be flying in the Alaska Range with the plane door wide open!

Alex repeated the same process and after hiking the 7 miles to the face, we built camp and settled into our sleeping bags. The next day we climbed a new route on the face above camp. It was a beautiful deep gully system straight up the face. The climbing consisted of AI3 to 4 with some steeper sections of 4+. In between the ice runnels, which were often narrow, was solid steep snow. The route is approximately 700 meters and is located on the SE Face of a sub-peak at 9,250ft tall. We rapped the route on almost all V threads in good ice. It was an exceptional day! By the time we flew out of the range, we’d only been there 72 hours and it was awesome to have done a “Smash & Grab” trip to the Alaska Range.

At this point we were so psyched on the climbing conditions that we invited up our close friend Austin Schmitz to join us for a second trip. Letting him know of course that it could be a flop - we might not get another weather window. It isn’t uncommon in Alaska to get punked by the weather. Well luck was on Austin’s side, who’d never even been to Alaska before, and the weather arrived as he did. Alex and I packed the team’s kit over a few days leading up to Austin’s arrival and we sped down to Anchorage to pick him up before driving straight back. When he hopped on his first Bush Plane ride the next morning all the way up in Black Rapids, he’d been in Alaska for only 14 hours or so.

Here again we used our “Air Mail” tactics with our pilot Jesse and this time it was a wild operation below the mighty North Face of Mount Moffit. The valley gets zero minutes of daylight during October. It is cold, dark, and quite intimidating. Alex went first and dialed in on a basecamp location on a rocky sub-branch of the Trident Glacier. We flew in one by one, dropping our bags and getting dropped off between 8-10 miles down glacier on a riverbed similar to our prior trip. The hike was more complex this time as we navigated bouldery terrain for many hours. When we arrived at our bags, it was cold and night was coming. We built camp and had a hearty dinner. The next morning we got going slow. The packing, traveling, and approach had worn us out. We got on a gully shortly after noon and had at it until nightfall. It was long and wandering with alternating sections of ice and snow. When night fell, we knew the top was still far away so we bailed. Too little energy to do it today. We rapped through the cold dark Alaskan night and went back to camp to rest. After two days' rest, we went back up the route and this time completing it. The best pitch was just above our previous high point at AI5, it was great climbing with sinker tools but poor pro given the airy nature of the ice. The route is on far left North Face of Mount Moffit and tops out on the Northeast Ridge. One could take the ridge on to the summit of Mount Moffit but we didn’t feel it was appropriate to do so given the time of year and snow conditions. The route is an awesome climb up more than 800m of snow and ice. Again we rapped through the night…

The next day winter came. Temps dropped to below -15 celsius and would get even lower over the next few days. It snowed about 15 cm of powder and made the bouldery walk out to the Tundra rather blind. This time, like our trip to the Gillam Glacier, we had to carry all the equipment we chucked out of the plane on the way in, back out. It was arduous and in the thin snow coat and cold temps we didn’t have the greatest time hiking out! It took us two days, only half a day on the way in. When we finally flew out we were back in the sun, having been hidden behind Mount Moffit for a week, and the rays warmed us and we left behind the cold and inhospitable Trident Glacier in Autumn. Overall, we found great conditions but many challenges come with climbing in the high mountains of Alaska in the fall. Wagering against the obstacles is the game and you’ve got to put a little extra into your planning and your intentions.