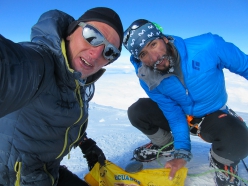 Karl Egloff and Nicolas Miranda on the summit of Denali of 20/06/2019. Egloff raced to the top of the highest mountain in North America in just 7:40
Photo by Karl Egloff archive 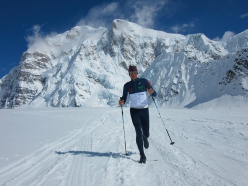 Karl Egloff racing back to Denali Base Camp to set the roundtrip time of 11:44
Photo by Karl Egloff archive 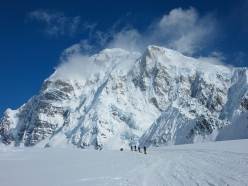 At 6190m in height, Denali is the highest mountain in North America
Photo by Karl Egloff archive 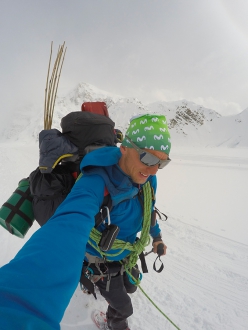 Ecuadorian - Swiss mountain guide Karl Egloff has set a new speed record on Denali in Alaska, climbing the West Buttress route in 7:40 and returning to his starting point in 11:44. In doing so he beat the previous fastest known time set in 2014 by Kilian Jornet Burgarda.

On Thursday 20 June 2019 Karl Egloff climbed the West Buttress route on Denali in record-breaking time, ascending the 26.55 km, 4060m elevation gain route in a mind-bending 7 hours and 40 minutes. In doing so, he sliced more than two hours of the previous fastest known time set in 2014 by Kilian Jornet Burgarda who required 9 hours with 45 minuts for the same route.

Not content, the 38-year old Ecuadorian - Swiss mountain guide raced down the same route and returned to his starting point 11 hours and 44 minutes after having set off. The previous fastest round trip was set, unsurprising, by Burgarda who unlike Egloff descended using skis and returned to camp after 11 hours and 48 minutes.

Egloff’s success on Thursday was supported by Ecuadorian mountaineer Nicolás Miranda and came about after a an aborted attempt in 2018 due to bad weather and dangerous mountain conditions.

It is clear that these ascents are amazing feats of skill and endurance and, at the same time, almost impossible to compare due to the fact that conditions obviously vary considerably from one ascent to the next. What is certain however is that Burgarda, demonstrating great sportsmanship, was one of the first to congratulate Egloff for his race up and down the highest mountain in North America.

Its' worth remembering that in June 2018 American alpinist Colin Haley made a record-breaking ascent of the nearby Cassin Ridge on Denali in 8 hours 7 minutes.