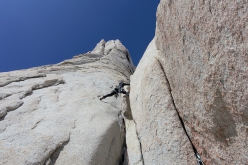 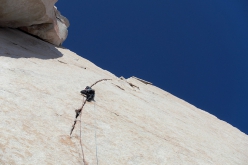 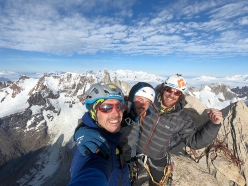 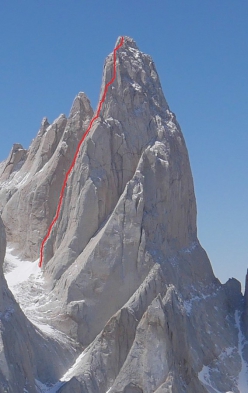 Italian mountaineer Matteo Della Bordella reports about his repeat with Matteo Bernasconi and Matteo Pasquetto of the 40º Gruppo Ragni di Lecco climb on the north face of Aguja Poincenot in Patagonia, established in 1986 by Mario Panzeri, Paolo Vitali, Marco Della Santa and Daniele Bosisio. While this is likely to be the first repeat, it was certainly a great 800m adventure up 'a fantastic route', climbed all free and onsight.

We returned to El Chalten recently after having been out about in the mountains for a few days. Once again we didn’t get a chance to attempt our main project on Cerro Torre; unfortunately conditions on this line are not good at all, actually, they’re downright dangerous! Giving up without even been given a chance to try is the hardest thing for me to accept, but the recent high temperatures and the face plastered in ice are a potentially lethal mix we don’t want to deal with.

Our "plan B" this time was on Aguja Poincenot (approx. 3000 m), up the route established to celebrate the 40th anniversary of our Ragni di Lecco climbing club. This fascinating and somewhat mysterious route was first ascended by Mario Panzeri, Paolo Vitali, Marco Della Santa and Daniele Bosisio in 1986 and (as far as we know) had never repeated. The route ascends the mountain’s north face for about 800 meters and was climbed over two days alpine style, past some sections where they resorted to the use of aid.

After deciding to abandon Cerro Torre we spent the first day making the long approach and fixing the first pitches before returning to the base where we bivouacked. We set off early the next morning and managed to climb the entire route in a day. Our aim was to climb it all free, so Matteo Pasquetto and I took turns swinging leads and hauling the gear. Matteo Bernasconi sacrificed himself and did all the dirty work, ascending as the third in our group and hauling all the rest of the gear.

In the end the pitches flowed smoothly one after the next via an extremely logical line of chimneys, at times slightly icy, at times via clean cracks. Matteo and I both managed to climb the route completely free and onsight; we reckon it’s a fantastic outing, long, demanding, past continuous difficulties even if these are never too extreme.

After enjoying a spectacular bivouac on the foresummit of Aguja Poincenot, on day three we continued along the ridge to reach the main summit. Then… just as we were beginning to relax and wonder "what if we’d tried Cerro Torre… who knows..." we heard a roar in the distance. Turning around to the east face we witnessed a huge ice mushroom fall, shattering into a thousand pieces below and creating a huge cloud of snow that enveloped both Cerro Torre and Torre Egger. We only just managed to photograph the final phase of this collapse (which was 4 times larger than what can be seen in the picture) but we realised full-well that our decision to avoid the East Face had been a wise one. We’ll bear this in mind in the future, too.

As to the 40º Gruppo Ragni route, we’d like to take this opportunity to congratulate the first ascentionists for their intuition and route finding skills as they - extremely young at the time - forged the first route up Poincenot’s north face. If it weren't for the long and arduous approach we're convinced that this route could become a coveted and popular ascent, due to the quality of the climbing and the difficulties that never exceed 6c. We are completely satisfied with this new adventure which we experienced simply and jst as we like it: a small group of good friends, in one of the less overrun corners of these mountains.