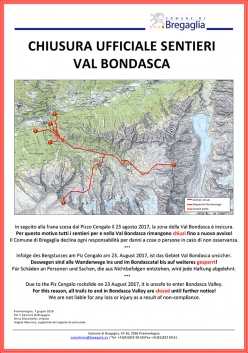 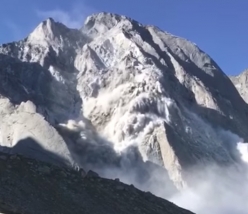 The Pizzo Cengalo rockfall on 23/08/2017. The video was filmed by Reto and Barbara Salis, hut wardens at Rifugio Sciora
Photo by Reto e Barbara Salis

For safety reasons all paths in Val Bondasca are officially closed until further notice following the Piz Cengalo rockfall on 23 August 2017.

Following the huge rockfall from Piz Cengalo in summer 2017, the municipality of Bregaglia in Switzerland has closed all paths to and in Val Bondasca. The decree, published on 8 June 2018 on the municipality’s official website, reads as follows:

"Due to the Piz Cengalo rockslide on 23 August 2017, it is unsafe to enter Bondasca Valley.

For this reason, all trails to and in Bondasca Valley are closed until further notice!

We are not liable for any loss or injury as a result of non-compliance."

02.01.2012
Piz Cengalo, NNE Face rockfall
After the rockfall last summer, on 27/12/2012 a new rockfall ocurrred on the North-north-east face of Pizzo Cengalo (3369m, Bregaglia) in Val Bondasca on the Swiss - Italian border. The report by Marcello Negrini.