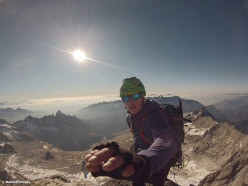 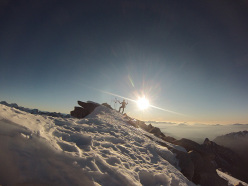 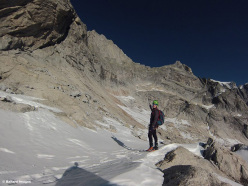 Tom Ballard looking back at the south face of Piz Badile, the "Molteni" takes a diagonal line from the highest point of snow to the ridge on the left skyline
Photo by Tom Ballard 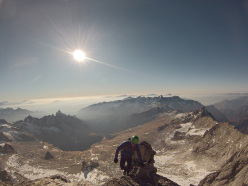 Tom Ballard and his plan B: Pizzo Cengalo and Pizzo Badile solo one winter's morning

Andrea Gaddi asked me if I would be I interested in making the first winter ascent of a route somewhere around Val Masino, he gave me a few options, of which Diretta del Popolo on the Piz Badile caught my eye. I traveled 6 hours by bus and train from Val di Fassa to Lecco. The next day we approached the Giannetti Hut.

After settling in we found a worried looking guy. His friends had left that morning to climb the Molteni route on the Badile south face. His phone did not have signal, but at just as the light was fading at 5.30pm we saw lights glinting on the summit! The small emergency bivouac is literally at the route's finish, so we knew they would be fine for the night. During dinner the guy told us he had met a couple of climbers coming down after successfully climbing Diretta del Popolo! And what route were we going to climb...? Actually that one! Andrea called around his friends to ascertain that this was in fact the truth! When it was confirmed he lit up the sky with profanities that were more brilliant than the shining stars!

While we were walking up, I had asked him (he wrote the current guidebook) about the great looking South ridge of Cengalo. He said it was a classic climb with superb positions and even better rock quality. So now it was time for Plan B. Unfortunately we did not have the time nor equipment for one of the other longer routes on Badile that still await a winter ascent. Andrea suggested I head off soloing, I thought about climbing both Cengalo and Badile in one day, well one morning actually.

I have always wanted to climb Cengalo, I don’t know quite why. It's worrying that huge chunks of the north side have fallen off and now reside in Val Bondasca. In fact, there are worries that more will come down and the Swiss, cautious and efficient as ever, are taking precautionary measures to protect the old village of Bondo!

At 6am I set off in the rough direction of Cengalo, I scrambled up to the obvious ‘gap’ in the ridge where I changed mountain boots for rock shoes. It was 7.30am and just light enough to climb without headtorch. It was a bit windy and the rock was very cold to touch with bare fingers. I was slow getting into the rhythm of climbing, it wasn’t until the crux grade VI pitch that I felt comfortable and at one with the rock. By this time the sun was just licking me and the ridge, bringing a startling colour and more importantly a little warmth to my fingertips.

The crux pitch is a beautiful rounded ridge with a few discontinuous cracks and where friction of the feet is crucial. All too soon though, I traversed off the ridge to find the steep, juggy, "Diedro Nero". By this point I was in full swing though and I regained the ridge in no time. This terminates at Punta Angela, where it is possible to abseil down the flank. I changed boots again, then with ice axe in my hand scrambled up to the summit cross. At 9.05am I was on top and drinking in the marvelous view. Also the snow, or lack of! I was wearing full winter gear, had used an axe, was about to use crampons on the descent, so was this a winter ascent? Well yes! The official winter season is 21st of December to 21st of March, even if you juggle the dates by a few days, this was during the winter season!


The descent was straightforward to Colle del Cengalo, during which I had a great view of the face we had planned to climb. It looked cold and all ledges and cracks were filled with snow. You would certainly earn your winter ascent on there! Wistfully I removed my crampons and ran down to the base. I don’t know why I ran, and certainly still felt it in my legs a few days later! I crossed the snow and ice towards the slabby south face of Badile and left a cache of gear: overtrousers, crampons, poles, headtorch, etc and set off, noticing a smear of ice that may melt and provide water later. I kept my new 6000m boots on for the transition between ice and rock, until I found a comfortable terrace to change. 40 minutes and 350 metres of enjoyable slab and corner climbing later I was changing footwear again in the bivy hut on the top! There was a cold wind as I stood beside the summit pyramid at 11.50am, reminding me that it was still winter, despite the sun and lack of snow!

I descended the normal route in about 30 minutes, passing the slow moving trio who had slept on the top. The ice I had noticed had melted and was now a rivulet of clear thirst quenching water. I drank and drank some more, all the worry and anxiety having disappeared once I set foot off the mountain! In solo climbing, no matter how easy or within your own limits , there are always questions being asked by the sensible part of your brain; are you sure? How are weather and conditions? Do you know where you are going? What about the descent?..... Usually these are heard loudly on the approach, and that is why I tend to rush up to the route. Because of that, and because I just want to get it over with! But I find as long as you follow your heart, things usually turn out for the best, if not quite what you thought beforehand!

I walked slowly back to the hut to be greeted warmly by Andrea; "you are no longer Tom, you are Thor!"

We leisurely packed up and slowly walked down to Val Masino. The next day whilst travelling back on the full trains (only on Frecciabianca between Milan and Verona did I have a seat!) I felt content and yet missing something. I had expected cold and typical winter suffering, and had instead experienced sun and a total at ease-ness with the mountains. And I realised that Stefania had had a point last year when she asked me why I wasn’t climbing the six south faces! It had actually been fun in the sun!