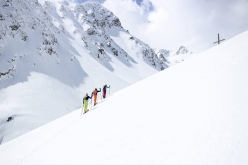 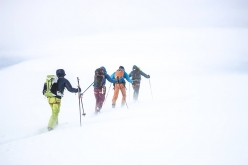 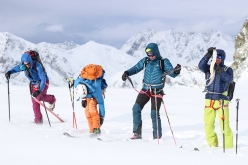 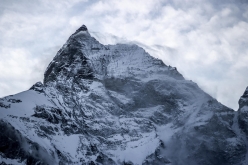 Red Bull der Lange Weg, the ski mountaineering traverse across the Alps: Bernhard Hug, David Wallmann, Philipp Reiter and Janelle and Mark Smiley have reached Courmayeur, Italy. If conditions are favourable, the alpinists will attempt to climb to the summit of Mont Blanc tomorrow.

Day 27 of Red Bull der Lange Weg. After the longest day so far - 15.5 hours and almost half of the time completely on their own along the famous Haute Route that connects Zermatt to Chamonix - yesterday the team left Switzerland, returned into Italy and reached Courmayeur in the late afternoon.

The team is currently enjoying a well-deserved rest day, while waiting for the weather to improve as tomorrow Bernhard Hug, David Wallmann, Philipp Reiter and Janelle and Mark Smiley will attempt to summit Mont Blanc. Since the route via the Italian side of the mountain is currently impossible the five ski mountaineers have decided to pull their joker, i.e. the option to travel up to 64 km by car, and drive through the Mont Blanc tunnel into France at midnight. On the other side of the tunnel they will then make their way up through the first on the French side of the mountain towards the highest point in Europe.

That’s the plan on paper… but early tomorrow morning the mountaineers will see whether it’s feasible or not as conditions so far have been extremely poor, with only 5 days of good weather during these first 27 days and over 1100 km traversed.

06.04.2018
Red Bull Der Lange Weg: the ski mountaineering traverse reaches halfway point
For the last 20 days Tamara Lunger, Núria Picas, Janelle Smiley, Mark Smiley, David Wallmann, Philipp Reiter and Bernhard Hug have been traversing across the Alps from Vienna to Nice. While Núria Picas has pulled out of the Red Bull Der Lange Weg, the others have crossed the Spluga Pass and are continuing westwards.