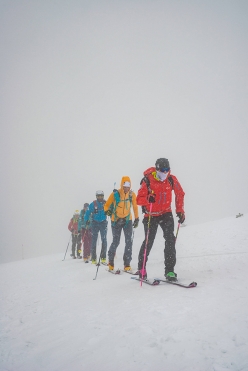 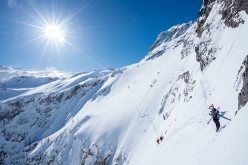 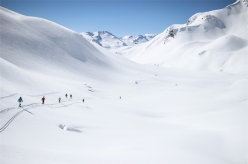 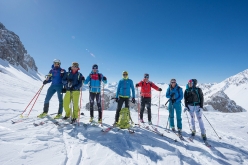 It's been a tough fight. This, in short, is the résumé of the first week of Red Bull Der Lange Weg. After having set off on 17 March from Reichenau an der Rax close to Vienna, yesterday Tamara Lunger, Núria Picas, Bernhard Hug, Philipp Reiter, David Wallmann and the couple Janelle and Mark Smiley arrived in Bad Gastein, Salzburg, Austria. The past eight days have demonstrated that the traverse across the Alps from Austria to Nice in France really is a mammoth task, made all the more difficult by adverse weather conditions.

After their departure last Saturday, the seven ski mountaineers had to fight with bad weather, fog, wind and cold. Only on Thursday and yesterday did the sun shine and, as a result, they often reached the supply cars in the dark.

The first stage led from Reichenau an der Rax to Mürzsteg. On the second day they went on a 14-hour, 62 km march to Tragöß. On day three, the mountaineers reached Johnsbach and arrived at Wurzeralm on the following evening. The fifth stage led them to Lake Ödensee in the Salzkammergut. On Thursday, the first highlight of the tour was carried out n sunshine: the ascent to the Dachstein plateau.

Apart from dealing with difficult weather conditions, some members have had physical problems and Núria Picas, Janelle Smiley and Tamara Lunger have all pulled their "joker" , enabling them to travel a part of the route by car just like the 1971 team did to cover a total of 64 km by car.

With the arrival in Bad Gastein, the team has now covered 398,9 km and 21.880 vertical metres on skis and on foot, having travelled for 83:02 hoursToday they tackled Austria's highest mountain, Grossglockner (3798 m), and in the next few days they will ascend Großvenediger (3666 m) before continuing eastwards.

The traverse can be followed at all times via live tracking.