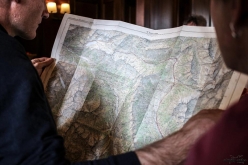 Red Bull Der Lange Weg: almost 2000 km and 85,000 of cumulative elevation gain from Reichenau an der Rax close to Vienna all the way to Nice
Photo by Red Bull 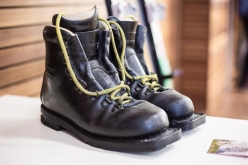 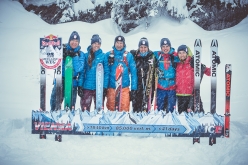 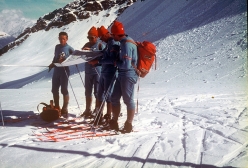 Der Lange Weg 1971: the Austrian ski mountaineers during the traverse of the Alps from Vienna di Nice
Photo by Red Bull

The Red Bull Der Lange Weg got underway today at 10:00am. The ski mountaineering traverse across the Alps from Vienna to Nice will be attempted by Tamara Lunger, Núria Picas, Janelle Smiley, Mark Smiley, David Wallmann, Philipp Reiter and Bernhard Hug. Following in the footsteps of the historic 1971 Austrians Robert Kittl, Klaus Hoi, Hansjörg Farbmacher and Hans Mariacher, the 2018 team aims to complete the traverse in less than 41 days.

At 10:00am sharp Tamara Lunger, Núria Picas, Janelle Smiley, Mark Smiley, David Wallmann, Philipp Reiter and Bernhard Hug set off from Reichenau an der Rax close to Vienna. After months of preparations, the seven ski mountaineers are embarking on a huge challenge: the entire traverse of the Alps from east to west, from Reichenau an der Rax and finishing, after almost 2000 km and above all more than 85,000 elevation gain, in Nice.

In practice, the Red Bull Der Lange Weg team will attempt to follow the route taken 47 years ago by the Austrians Robert Kittl, Klaus Hoi, Hansjörg Farbmacher and Hans Mariacher. And they will attempt to be faster than the 1971 expedition, ie less than 41 days. The task that lies in store is by no means easy, also because they plan to ascend some of the highest mountains in the Alps such as Großglockner (3.798 m), Piz Palü (3.900 m), Punta Dufour (4.634 m) and Mont Blanc (4.808 m). Obviously the entire traverse can be followed at all times with the live tracking.


TEAM MEMBERS
Tamara Lunger (ITA),
31, is a successful Italian ski mountaineer who additionally dedicated herself to alpine climbing in 2009. She was the Italian Champion in ski mountaineering twice and U-23 World Champion in 2008. Her projects in climbing include K2, Manaslu, and Lhotse. Since 2013 she has also joined some ultra-trail races and won the Transalpine-Run in 2014 together with Annemarie Gross. She gained experience in long ski tours when she crossed the Karakorum in Pakistan on touring skis in 2013. Naturally she played an enormous role in the successful first winter ascent of Nanga Parbat.

Nuria Picas (ESP) is one of the most successful ultra-trail runners in the world. The 41-year-old has won nearly every important international competition, even though the doctors told her after a climbing accident 19 years ago that she would never be able to walk again. She dominated the SkyUltra category of the Skyrunner World Series in 2012, as well as the Ultra-Trail World Tour in 2014 and 2015. In 2017, she took victory at Hong Kong 100, Ultra-Trail du Mont Blanc and Maratón Transgrancanaria.

Janelle Smiley (USA) from Colorado (USA) is a ski mountaineer and climber. She won the North American Ski Mountaineering Championships in 2012 and 2014 and is 3-time US champion in this discipline. Her hunger for adventure in the snow has led the 36-year- old to remote peaks all over the world. She runs Blue Square Productions together with her husband Mark in Jackson, Wyoming. The company offers mountain guiding as well as film and photo shootings.

Mark Smiley (USA) is a professional photographer, filmmaker and mountain guide. The 37-year-old loves spectacular descents and skied Mt. St. Elias (5489 m), Canada, Huandoy East (6000 m), Peru, and Denali (6190 m), Alaska. Some years ago, he began to complete the “Fifty Classic Climbs of North America” together with his wife Janelle. Mark Smiley has led 7 international expeditions, 5 Alaska expeditions and countless trips all across the USA.

David Wallmann (AUT) is a trail runner and ski mountaineer. In ski mountaineering, he won the Reither Kogl Trophy and Nesslangerlalm Aufstieg in 2017 as well as Schönleitentrophy and Gaissau Hintersee Trophy in 2016. As a trail runner, he took the title at Stubai Basic Trail and Zugspitz Trailrun Challenge Marathon 2017. David Wallmann is a teacher in Bischofshofen, Salzburg, Austria, in his day job.

Philipp Reiter (GER) is a trail runner and ski mountaineer. The success story of the 26-year-old began in 2009 when he took part in the World Mountain Running Championships in Campodolcino (ITA). In 2017, he took second place at Südtirol UltraSkyrace in Bozen (ITA) and the German Ski Mountaineering Championship, “Jennerstier” in Berchtesgaden (GER). Reiter is also an expert photographer and cameraman.

Bernhard Hug (SUI) began his career as a mountain runner and as a team member of the National Swiss Triathlon team. The 44-year-old took part in 20 Ironman competitions. Later, he discovered adventure racing, where he finished several World Championships among the top ten with different teams. In addition, he’s seen as one of the trail-running pioneers of Switzerland. Since 2012, he’s responsible for the competitive ski mountaineering athletes at Swiss Alpine Club.