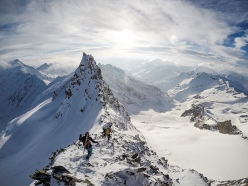 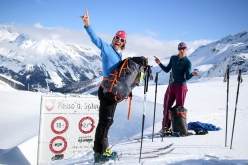 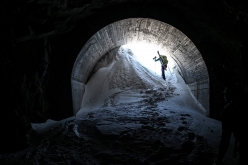 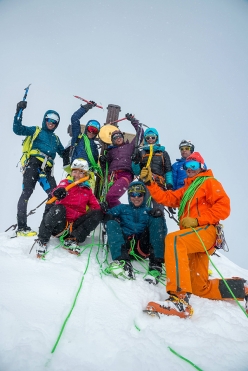 For the last 20 days Tamara Lunger, Núria Picas, Janelle Smiley, Mark Smiley, David Wallmann, Philipp Reiter and Bernhard Hug have been traversing across the Alps from Vienna to Nice. While Núria Picas has pulled out of the Red Bull Der Lange Weg, the others have crossed the Spluga Pass and are continuing westwards.

During the first 18 days of their project called Red Bull Der Lange Weg the seven ski mountaineers only had 4 days of good weather and this obviously influenced progress; they had to abandon hopes of climbing Piz Palü for instance, as conditions proved too dangerous. Nonetheless, after entering Italian territory on March 28th, and after Núria Picas's decision to abandon the traverse, the long ski mountaineering trip continues incessantly. Yesterday the team crossed the Spluga Pass and is now heading towards Saas-Fee and Zermatt before moving on towards Courmayeur and Mont Blanc.

So far the ski mountaineers have walked and skied for more than 916 km, dealing with over 45,808 meters height gain. Although they are slightly ahead of the Austrians who completed the traverse in 1971 it should be noted that, due to unfavorable conditions, this year’s team has not been able to follow the original route in its entirety. Quite rightly so, because as always the first and only rule is mountain safety.