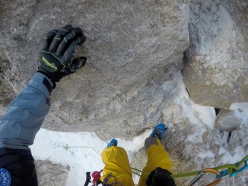 Hermann Comploj on 24 March 2021 making the first ski descent of the North Couloir of Col Turont in Langental, Dolomites
Photo by Hermann Comploj 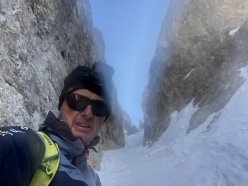 Hermann Comploj on 24 March 2021 making the first ski descent of the North Couloir of Col Turont in Langental, Dolomites
Photo by Hermann Comploj

Interview with mountain guide Hermann Comploj who on 24/03/2021 made the first ski descent of the North Couloir on Col Turont (2419m) in Langental / Vallunga, Dolomites, Italy.

Taking advantage of the stable, compact snow at the start of spring, on Wednesday 24 March Italian mountain guide Hermann Comploj explored an important new ski descent down the north face of Col Turont in Langental / Vallunga, Dolomites. Unlike many other descents Comploj has made in the past, such as the north face of Murfreid in the Sella Group and the SW Face of Langkofeleck, the recent descent was not the result of years of patient waiting, but a spur of the moment decision after noticing the face in exceptional conditions the week beforehand. Born in 1957, Comploj skied the line alone, with two short abseils, taking just over an hour for the descent.

Hi Hermann, congratulations for another new ski descent in the Dolomites! On a mountain in a valley that you love dearly!
Langental is located in the Puez Odle Natural Park and yes, I’d say I know the area well as I live right at the start of the valley! Right at the end, where the valley steepens, lies Col Turont, with its beautiful north face broken here and there by ledges.

It’s got quite a rich mountaineering history, isn’t that right?

Absolutely. You can make out the mountain from Vallunga and, up on the right and detached from the main summit, there’s 80m high Torre Lietres. This tower has a spectacular, perfect corner that was climbed by Hruschka way back in 1921 from, a grade V climb with one section of A0 aid!After this the mountain was abandoned for a while, then in the 1990’s Karl Unterkircher and his climbing partners established some new routes, as did the Riegler brothers, then in 2015 Adam Holzknecht and Alex Walpoth established Amore e Ombra on the upper part of the mountain. This leads me to my descent, because I skied down the gully where this mixed climb starts. On the SW face Daniel Ladurner, Hannes Lemayr and Florian Riegler made the first ascent of Once in a Lifetime in 2018 and this has proven so popular that last year a a queue formed below this icedall! Last but not least, directly opposite my line the local climbers Armin Senoner and Adam Holzknecht made the first ascent of two mixed routes during the same period as my ski descent.

So how did this descent come about?
It was something very recent actually. Ten days beforehand, while skiing opposite in the Puez group I noticed this line that had formed on Col Turont. I didn't have my binoculars with me but I took a phone, then at home I studied it carefully and realised that it might be interesting.

And so you set off to take a look
Precisely. I left home on my e-bike, then skinned up into Val Lietres, then by arching left I reached the summit of Col Turront. From there I skied the gully that, after a 100m drop, leads to some ledges. The first part was relatively wide with hardpacked, windswept snow, then it narrowed and with my 170 cm skis I could hardly pass. This is the steepest section, 53°, and after a few meters I took off my skis, down climbed about ten meters, then made a 25m abseil which led me to the ledges.

All on your own of course
Yes, but at the top I noticed the tracks of a chamois that I probably frightened on my way up. It's interesting because the chamois slid down the same gully I wanted to ski. It chose a different route at the end, but from the ledge onwards I followed a well-beaten chamois track. It was a very special moment. Also because there’s a family tie: my grandfather was a poacher, then a hunter, then a mountain guide from the 1920s to the 1950s. There’s no doubt in my mind that he’d explored those ledges, many, many years before me!

And after the traverse?
After the ledge there’s a long couloir that finishes with another 10m leap, then a gully leads more easily down into the Vallunga forest.

Sounds almost easy!! But from the photos it’s obvious that it was quite an exposed enterprise
Yes, both the gully and the ledges are exposed, over 40°, so you have to be vigilant. At the first abseil I used a peg, at the second I looped a 6mm rope around a spike and didn't leave any gear in-situ.

You’ve been exploring new descents in the Dolomites for many years now Hermann
I just enjoy it too much! Studying new things, finding something where not everything is already done and dusted. This really motivates me.

You described it as a present close to home
Yes, and something "last minute". Unlike other descents that I’d studied for many years, this time I noticed it and, ten days later, skied it. It’s clear that at the end of March the snow isn’t the same as in January, but it also means that the snow pack is far more stable. Compact, no powder, and consequently a lower avalanche risk. I prefer it like this.

How do you rate it?
I think it is one of the lines that will be repeated fairly often, more than mine on Langkofel for sure.

Going back to the question above: you often carry out these descents solo
In recent years I have done several things alone, yes, from Langkofel to the north face of Sella. Usually I am out and about with clients, or with friends or my wife, and descents like these are therefore moments of great freedom, where I have to look after no one else but myself. I'm not a lone wolf, but I do enjoy exploring the mountains on my own. It’s an integral part of me.

Rifugio Pisciadu, next to the Tridentina Via Ferrata, Sella
Hermann Comploj together with Manfred Runggaldier, 15/04/2010
Angle 52°