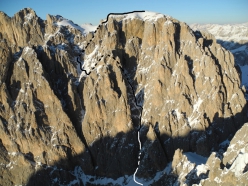 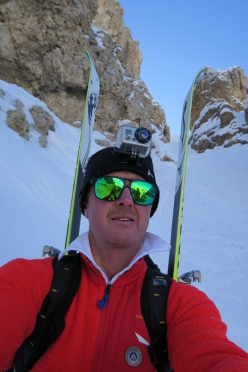 Langkofeleck: first ski descent in the Dolomites by Hermann Comploj

On 20/039/2016 Hermann Comploj carried out a new first ski descent in the Dolomites, by skiing a line alone down the SW Face of Langkofeleck, also referred to as Spallone Sassolungo 3081m.

At 3081m in height the Langkofeleck, or Spallone Sassolungo in Italian, is one of the most important and beautiful peaks in the Langkofel (Sassolungo) group, a mere 100m lower than the famous main summit. Fifteen years ago, namely in March 2001, the mountain guide Hermann Comploj and his client Fredmund Malik carried out the first ski descent of the South Face, plunging down the deep SW gully towards Col Rodella and Colac. Ever since then Comploj often wondered whether it would be possible to ski down the wild SW Face, a veritable maze of steep towers and narrow gullies, as fascinating as it is difficult to decipher. While two years ago the former member of the Italian ski team added a new first descent to the Murfreid North Face in the Sella Group, on 20 March 2016 the time finally came for the SW Face of Langkofeleck and for what Comploj now describes as "a beautiful line." This, just like the Murfreid North Face, was skied alone, fully aware of the commitment and risks associated with a solo descent of these sorts.

I’d studied the SW Face for years, in search of a possible way down on skis. In summer I’d even established two grade V+ rock routes here, in a really wild ambient, full of towers and steep gullies: Vera V+ up Campanile dl Dragon and Sara V up Campanile Malik.

Last year I made the first winter ascent of the Vera route on Campanile dl Dragon with a client, and this gave me the opportunity to examine a possible ski descent line from up close. On 20 March I finally found this beautiful line which can be skied almost entirely, except for two abseils, one 60m, the other 30m.

I encountered all different types of snow, from power on the summit and first gully that faces west, to hard crust. I then ascended a NW facing gully and this too was full of powder snow, I sank into it up to my belly. I reach the col between Campanile dl Dragon and the shoulder and then continued down an extremely narrow east facing gully and, once again, the snow was crusty. After circa 100m I joined the main south-facing gully and the lower I got, the more icy the snow became. I took my skis off twice and put on my crampons to negotiate some icy sections. Towards the end 2 abseils led me down to the base of the face, where the normal route up Langkofel begins.

Rifugio Pisciadu, next to the Tridentina Via Ferrata, Sella
Hermann Comploj together with Manfred Runggaldier, 15/04/2010
Angle 52°