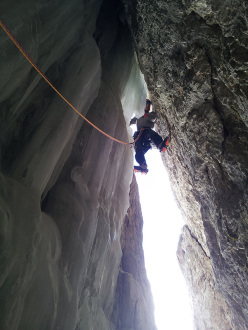 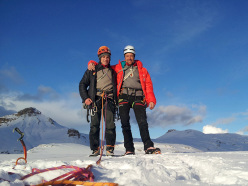 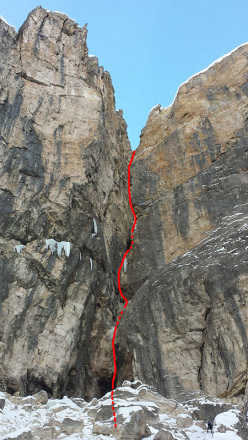 High up in Vallunga in the Italian Dolomites Adam Holzknecht and Alex Walpoth, two alpinists from nearby Val Gardena, have completed the first ascent of Amore e Ombra, a difficult new mixed outing that follows a logical series of of cracks and corners up the Col Turont face. “Of Love and shadows” has all the hallmarks needed to become a true gem in this beautiful and wild valley: while the first four pitches climb mixed terrain, the last pitch breaches rock to reach the summit and, apart from just one single peg, the entire route is protected with nuts, Friends and ice screws. Ice climbing, dry tooling, some cold rock climbing... in short, a demanding mix of abilities are needed to deal with the difficulties, estimated in the region of M9, VIII, WI5. The report published below is written by young Walpoth who, in addition to being justly satisfied with his first ascent, quite rightly asks "What could be more exciting for a young climber than establishing a new route with one of his idols?”

OF LOVE AND SHADOWS
- because one cannot exist without the other

When Adam Holzknecht explained to me about a year ago that he might have discovered something new, something that would need closer inspection, I was immediately impressed. With rucksacks strapped to our sledges we made our way to the end of the Langental where, high up on the right, we finally caught a glimpse of the unexplored wall. We didn’t see much ice, the face didn’t want to reveal its secrets. To discover these we first had to fight our way through the mountain pines and ascend a steep slope laden with fresh powder snow. We were rewarded with an impressive natural formation, a deep cavity in the rock, hidden from sight. A slender sliver of ice graced the dark wall and higher up, above the “cave”, a thin drip hung perilously. Adam set off and immediately tested a Friend before climbing a diagonal crack to reach the ice. The first blow provided a clear indication about the ice quality, and Adam exclaimed enthusiastically: "The best thing about mixed climbing is when you reach the ice." His words echoed in my mind as I followed him, also because at the time I was completely inept at "dry tooling". I willingly let Adam take the lead on pitch 2, an extremely challenging traverse below a roof. Time and again holds snapped off, and it was only after driving in a peg and some precarious hooking that Adam reached the ice, which gave us 10 meters of superb climbing. As I fought my way up, God knows how with ice axes and my bare hands, it started to get dark: as inviting as the seemed, we’d have to console ourselves with the rest another time.

A year passed during which I learnt the art of mixed climbing. When we returned to the base in January, Adam reminded me that last year I’d stated dry tooling wasn’t my cup of tea. Well, my love for this sport had definitely grown! This time the traverse on pitch 2 was even more difficult because there was less ice. Adam finally entered virgin territory: a crack, overhanging at first, then gave way to a smooth corner and a slender drip of ice. Adam made big moves and rapid progress, then the natural pro became more run-out and the transition onto the ice required some complex and creative climbing. Two or three blows into the ice and we both breathed a sigh of relief, then Adam disappeared from view. When I joined him at the belay I was even more taken away by the bizarre ambient: we were in a deep chimney, one side was completely covered with ice, drips hung down, bent sideways by the updraft. The chimney closed higher up, pushing me outwards, past some beautiful ice to reach another roof. Some stalactites hung off this and it took me a long time to convince myself that I could trust them. I finally placed a good Friend in the rock; the rock I finally was able to get the first good friend; with ice axes strapped to my harness I climbed up the pumpy crack which, right at the end, spat me out. At first I was angry that I’d failed to make an onsight first ascent, but after the next few unsuccessful attempts - one of which resulted in a long fall and a Friend ripping out - all I wanted was to get to the top of the pitch. The crack petered out and transformed into a smooth corner, a knee bar and some powerful moves got me through the crux and this was followed by some great, demanding climbing to reach a wedged block which I used as a belay. When Adam, thrilled with this beautiful and difficult fourth pitch, reached my belays the day become to come to an end. One pitch of pure rock climbing, difficult to protect, dumped us onto the flat, snowy plateau. We abseiled down the route into the darkness and the euphoria of having completed our interesting and varied line lightened our loads during the long descent.

Later that evening, while eating a pizza, we talked about the outstanding first free ascent due to our failure on pitch 2. This is really pumpy and in the middle you have to switch from climbing with the ice axes to climbing with bare hands, requiring some pretty different techniques.

We returned three weeks later to attempt to free the route.This time we brought with us our biggest Friends which proved extremely useful on pitches two and four. On pitch two Adam "invented" a new sequence and since we both found pitch three harder than a few weeks back, we stood below the start of the crux pitch somewhat skeptical. Adam shouted up words of encouragement as I set off, climbing the drips went smoothly, as did the precarious hooks. I now took off my gloves and climbed resolutely past the knee bar. I’d climbed the hardest section, what lay in store now was a second crux that, apart from the technical difficulties, was made harder by the added tension. Contrary to expectations - and after much hesitation - I managed to get past this, too, only to race excitedly and confidently up the final moves to reach the belay. Unfortunately Adam ran out of power as he followed me, but instead of being demotivated he showed his true worth by leading up the last pitch, proving his superiority once again on vertical, snowy and somewhat loose rock. We reached the top just as the sun set. It was pitch black when we got to the car, but the day wasn’t over yet ...;)

Finding the right name turned out to be just as hard as the free ascent. After the first ascent Adam wanted something that included the word “shadow”, to emphasise the remote location and the dark atmosphere. I on the other hand wanted to emphasise the route’s beauty and while looking for a book I caught sight of “Of love and shadows" by Isabel Allende I was immediately taken in. I’d already read this wonderful book and Adam warmed to the name immediately. As time passed the name took on a more general meaning as I realised how close these two opposites actually are, and the free ascent had proven highly satisfying.