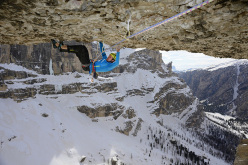 On 27/09/2014 Florian Riegler, together with his brother Martin Riegler, has made the first free ascent of the multi-pitch rock climb Albatros (8b, 200m) up the South Face of Col Turont, Vallunga, Dolomites.

On 4 September 2009 Martin Riegler, while base jumping off Col Turont in the Italian Dolomites, was struck by the beauty of its south face Some time later he ended up sport climbing at a crag nearby and from there, between one climb and the next, he carefully observed the face and its fantastic, unclimbed roof. Together with his brother Martin he realised that the entire left-hand side of the face had never been breached before.

Fascinated by this almost horizontal roof the two decided to set off and search for a logical line through this "ceiling". After three days preparation they started the first ascent on 3 March 2012, calling the route Albatros because the roof, from below, resembled a bird in full flight. In the weeks that followed they repeatedly tried to tame Albatros, but this proved impossible due to the constantly wet holds. They even attempted the route in other seasons but the holds simply didn't want to dry out, even if the line faced south!

On 27 September 2014 the Riegler Bros attempted the route for the nth time. Conditions were unusual for this summer: it hadn't rained for almost a week. The weather was splendid and climbing in the warmth of the sun was indescribable. They really wanted to make the most of these conditions and finally make the first redpoint. What lay ahead were a mere 8 demanding moves and, should they be climbed clean, then the route would be in the bag. Yet every time Florian reached the lip he inevitably fell. Martin motivated his brother, encouraged him to give it one more go since the forecast was for more rain in the ensuing days. Florian was exhausted and didn't reckon he'd make it, yet he gave it one last go. Climbing quickly up the vertical, his head completely free of thoughts, he sent the route. The unexpected often happens!