► News ► Alpinism ► Once in a Lifetime in Val Lietres, spectacular ice climb in the Dolomites
Versione italiana 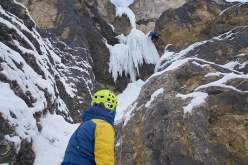 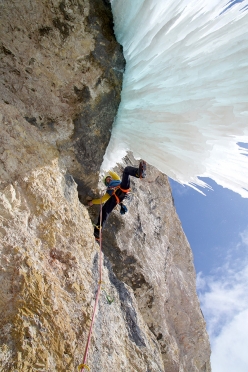 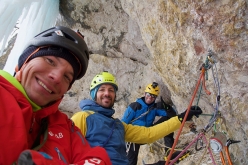 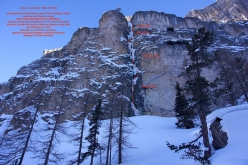 PORTFOLIO / gallery Portfolio: Once in a Lifetime in Val Lietres, spectacular ice climb in the Dolomites

Once in a Lifetime in Val Lietres, spectacular ice climb in the Dolomites

On Col Turont in Val Lietres (Puez - Geisler group, Dolomites) Daniel Ladurner, Hannes Lemayr and Florian Riegler have established Once in a Lifetime (WI6+, M8, 165 m), a beautiful icefall which probably has never been climbed before.

Once in a lifetime. This is the name and, above all, the feeling the South Tyrolean alpinists Daniel Ladurner, Hannes Lemayr and Florian Riegler had in February when they climbed what is highly likely to be a grande new route up Col Turont in Val Lietres, a side valley located in the Puez - Geisler mountain group in the Dolomites.

At the start of February Lemayr noted that, quite unusually, a drip was beginning to form opposite the famous Dolomite testpiece Jumbo Jet. After having called his regular climbing partner Daniel Ladurner, a few days later Lemayr hiked back into the valley on his own to check out conditions and climb the first few meters on his own.

As soon as Ladurner was free from work commitments, Lemayr and Ladurner returned to the base of the route together with expert ice climber Florian Riegler. The trio climbed the entire 165 meter line and equipped it with bolts and pegs where they deemed necessary.

On 18 February the three returned to make the first free ascent. It was, in Ladurner’s words, a "special moment" as they knew they had just experienced something unique. Something that, as they stated happens only once in a lifetime.

TOPO: Once in a Lifetime, Val Lietres, Dolomites

19.10.2017
Gnadenlos, difficult and dangerous new Ortler ice climb
On the NW Face of Ortler (3905m) Daniel Ladurner, Johannes Lemayer and Herbert Plattner have made the first ascent of 'Gnadenlos', a new icefall described as 'WI5 with great risk'.