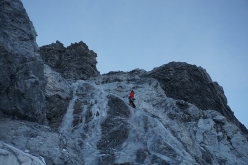 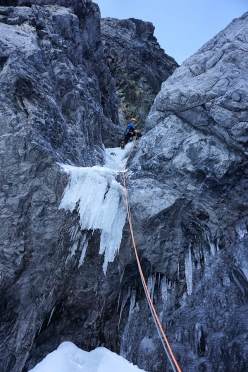 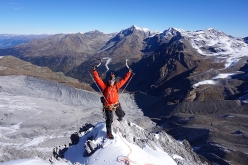 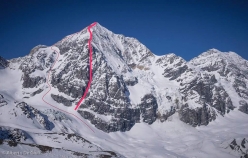 The line of Schattenspiel, the new mixed climb up Königsspitze, first ascended on 07/10/2017 by Johannes Lemayer and Daniel Ladurner
Photo by Alberto De Giuli

Mountaineering in the South Tyrol: on 07/10/2017 Daniel Ladurner and Johannes Lemayer climbed Schattenspiel, a line they believe is a new route described as 'a fantastic line of ice' up the NE Face of Königsspitze / Gran Zebrù.

South Tyrolean alpinists Daniel Ladurner and Johannes Lemayer have made an early kick-off to the winter climbing season by ascending what according to recent research is likely to be a new route up the NE Face of Gran Zebrù, the 3851 meter peak also referred to as Königsspitze.

Ladurner and Lemayer set off on Saturday 7 October to climb what they have described as "a fantastic line of ice" that ascends the obvious couloir circa 100 meters the right of Ostrinne, the gully used in winter as the normal ski mountaineering route to the summit.

Ladurner and Lemayer encountered difficulties up to M6 and WI5 past poor rock and some poorly protected sections. After climbing the steep gully for 700m they reached the "Frühstücksplatz" on the shoulder of the mountain and joined the Ostrinne before continuing more easily for another 200 meters to the summit.

Talking to planetmountain.com, Ladurner stated "the route is a highly demanding alpine climb, offering climbing that should not be underestimated through the gully system. Hard snow and ice, and poor rock provided some extremely tricky sections that were hard to protect. It should only be climbed in autumn, in very cold temperatures!"

Asked why such as plum line may never have been climbed before, Ladurner suggested "We’ve spoken to lots of people and all agree that never before has so much ice formed. This is probably due to the retreat of the glacier close to the summit."

In December 2016 Ladurner and Lemayer made the first ascent of Pleishornwasserfall, a huge drip on the NE Face of Ortler.