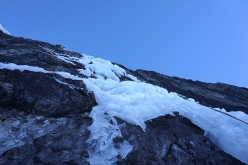 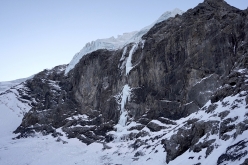 Alpinism: the video documenting the first ascent of Pleishornwasserfall, the new ice and mixed climb established on 13/12/2016 by Daniel Ladurner and Johannes Lemayer up the NE Face of Ortler (3905m).

In December 2016 Johannes Lemayer made the first ascent of Pleishornwasserfall, a difficult and dangerous 260m line up the NE Face of Ortler, the 3905m peak which checks in as the highest mountain in Italy’s South Tyrol. Lemayer made a first attempt on 10 December with Herbert Plattner to about mid height, and returned three days later with Daniel Ladurner for the second, decisive climb. Here’s the video of the ascent, which breached difficulties up to WI6, M7+ and A1.

RELATED NEWS
15/12/2016 - Pleishornwasserfall, new ice climb on Ortler North Face
On 13 December 2016 Daniel Ladurner and Johannes Lemayer made the first ascent of Pleishornwasserfall (260m, WI6, M7+, A1), the obvious drip that plunges down the Northeast Face of Ortler, at 3905m the highest mountain in Italy’s South Tyrol.