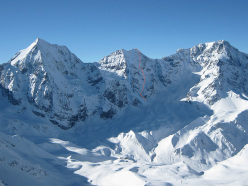 The line of Serac, a possibile new route up Monte Zebrù climbed on 21/04/2015 by Florian Riegler and Martin Riegler. On the left the Königsspitze, on the right Ortler.
Photo by Wikipedia

Precisely a week ago the South Tyrolean brothers Martin and Florian Riegler climbed what they have defined as a "logical line" up the NW Face of Mount Zebrù, the beautiful 3735m peak wedged between the Königsspitze, referred to as Grand Zebu in Italian, and Ortles. The line, which according to initial research could be a new route possibly due to its proximity to the large serac, breaches four pitches of hard ice with difficulties up to WI4 to then continue more easily to the summit.

As soon as we arrived at Solda and got out of the cable car we were told that the "Città di Milano" mountain refuge was closed. Usually it isn’t, but right it is. What should we do? Going home wasn't an option so we just had to sleep in the car for a few hours and leave early the next morning directly from the village.

At 2:30am we strapped our skis to our rucksacks and headed towards Mount Zebrù. Dawn broke as we reached the base. Our goal was to climb the ice drip directly next to the serac, then continue diagonally up to the top. The faster we’d climb, the safer we’d be.

The ice was extremely hard, luckily we’d sharpened the picks. It was the first time I climbed so close to a serac; it was extremely fascinating, yet also very dangerous. We climbed quickly and at 6:00 we left this section behind us to reach easier ground. What I’d given for a good cup of coffee! Instead I was hundreds of meters below the summit. We packed our ropes onto our packs and then, all of a sudden, saw the camera disappear into the void. "Sh..!" We proceeded, there was still a lot of snow above us and it looked tiring. We wouldn’t find the camera intact.

In order to climb light we decided on only the most minimal equipment. This of course has some disadvantages. We’d drunk our half liter of tea in no time at all and thirst obsessed us. Fortunately we discovered an easy and logical line upwards and reached the summit without further ado. We congratulate each other and began the descent to the north.

As we descended it got hotter and hotter and our thirst became unbearable... fatigue began to set in after our sleepless night. "Concentrate!", I thought to myself, as we descended unroped. At 14:00 we’d done it, we’d returned to our starting point. The bar wasn’t too far off!