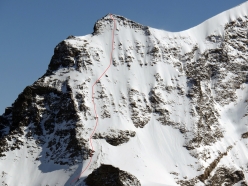 The video by Yannick Boissenot and Davide Capozzi of their recent ski and snowboard descent of the South Face of Grand Combin de Valsorey in Switzerland.

It was nice to return, two years down the line, to this imposing Swiss massif made of three distinct peaks: Grafenière, Valsorey and Tsesette. In 2015 Julien Herry and I had descended three different lines from Grand Combin de Grafenière (4314 m), including the East Face with Denis Trento.

I’d always planned sooner or later to ski the south face of Gran Combin de Valsorey (4184m), clearly visible from the city of Aosta. This year the face was always packed with snow and so it was just a matter of finding time and some helpful and motivated friends. Yannick was one of these.

Although it’s not an extremely difficult descent and has been repeated on several occasions, finding the right conditions to ski directly from the summit isn’t something that can be taken for granted, so this proved a good opportunity to go and check it out.

Grand Combin is a mountain with a fairly long and tiring approach, both from Italy and Switzerland. We opted to climb it from Switzerland and spend a night at the Cabane de Valsorey winter refuge located at 3037m. From Cabane Valsorey you can admire the entire NE Face of Mont Velan and the Mont Blanc massif in the background.

The ascent from Cabane to the summit of Combin de Valsorey is 1200m high, first up fairly steep slopes to reach Plateau du Couloir before climbing the South Face proper, up 40° - 45° terrain for about 600m. This route is entirely in Swiss territory.

Yannick's ability, not only as a mountaineer and skier but also as a filmmaker, provided us with wonderful images of this beautiful little adventure.