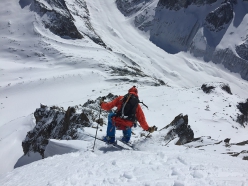 Yannick Boissenot making the first turns down the SE Face of Aiguille du Moine (Mont Blanc) where together with Nicolas Brunel, Titi Gentet and Stéphane Roguet, he skied a new direct variant to the line established by Jean Marc Boivin in 1987.
Photo by Titi Gentet

Last Saturday the French skiers Yannick Boissenot, Stéphane Roguet, Titi Gentet and Nicolas Brunel skied the SE Face of Aiguille du Moine in the Mont Blanc massif, initially following the line first skied in 1987 by Jean Marc Boivin to then deviate right at circa half-height and continue down an independent gully. This addition is therefore a "direct variation" to the famous line repeated very rarely; the known descents can be counted on the fingers of two hands and include Jérome Ruby and Dédé Rhem (first snowboard descent), Davide Capozzi, Julien Herry, Stefano Bigio, Francesco Civra Dano and Luca Rolli on 21 February 2012 and then, a few days later, Luca Pandolfi and Ben Briggs.

"While skiing down the Vallée Blanche we noticed this couloir in the middle of the face that looked pretty good" explained Boissenot and Roguet "We decided to climb in the couloir to be sure of the conditions. So we started at the top and first we skied down the Boivin line, the initial turns were very steep, then in the middle of the face we chose this small couloir, more direct… We only rappelled down 10 meters because the end of the couloir, 1 meters wide, was too narrow for our skis, and we also used the rope for the exposed 4-meter traverse at the end of the face."

Boissenot and Roguet are on great form and together with Marc Léonard they landed another interesting descent a few days earlier, namely the Voie Washburn (Les Z) on the North Face of Aiguille Verte. Located to the right of the famous Couloir Couturier, this line follows more of less the historic route established in September 1929 by Georges Charlet, Alfred Couttet, André Devouassoux and Bradford Washburn, but where this follows the path least resistance up rocks, in descent the line obviously zigzags to join the snow patches. This is why, after the first ski descent in 2013 carried out by Vivian Bruchez and Séb Montaz, the descent route is referred to as Voie Washburn (Les Z). In seems as if in future this line may become a sort of extreme skiing classic in the Mont Blanc massif, also because in recent years the non-plus ultra descent, the adjacent Couloir Couturier, has failed to come into condition completely. For the record, thanks to the recent good conditions, Voie Washburn (Les Z) was repeated a few days after the Frenchmen by Davide Capozzi and Julien Herry, who carried out the first snowboard descent, together with Lambert Galli on skis.