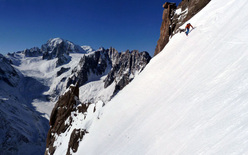 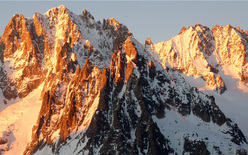 It's possible that it's only been skied three times. We're talking about the beautiful SE Face of Aiguille du Moine in the Mont Blanc mountain range. In fact, after the first descent carried out by Jean Marc Boivin in 1987 only one other descent is recorded, namely that by Jerome Ruby and Dédé Rhem, until last Tuesday when a team of five Italians comprised of Davide Capozzi, Julien Herry, Stefano Bigio, Francesco Civra Dano and Luca Rolli managed to seize a truly magical moment.

"It's not as if we make great descents every week" Capozzi explained to planetmountain "but this is a good period, we're on form and we've now skied a really symbolic, historic, legendary run: the SE Face of Aiguille du Moine." To comprehend the meaning, check out Capozzi's words below and alto the video of Boivin's first descent, which starts at 5:26.

Aiguille du Moine rises directly behind Rifugio du Couvercle, and the SE Face is usually climbed in summer since its the normal route up this elegant peak. It's also a legendary descent and many will remember the images of Jean Marc Boivin who on 17 April 1987 enchained (with the use of a helicopter) this descent with the South Face of the Dru, Couloir Whymper on Aiguille Verte, the North Face of Les Courtes and the South Face of the Gran Jorasses.

Thanks to particular good snow cover, this year we managed to descend this rarely skied face. The descent is steep and exposed throughout and the snow was difficult to ski. Furthermore, we had to make a short abseil (15m) to get down a rocky slab which didn't have enough snow on it.

During Boivin's first descent you clearly see that he avoided this section by skiing a snow-filled gully which no longer exists. Apart from Jean Marc Boivin's descent, in the years that followed it was descended by snowboard by Jerome Ruby and Dédé Rhem. We do not know of any other ascents, and on Tuesday we were Julien Herry and myself on snowboards, and Stefano Bigio, Francesco Civra Dano and Luca Rolli on skis.