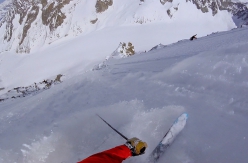 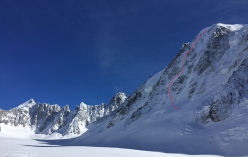 On Sunday Yannick Boissenot, Stéphane Roguet, Nicolas Brunel and Titi Gentet made an extremely rare ski descent of the Austrian route on the North Face of Les Courtes (3856m) in the Mont Blanc massif. Graded ED+, 50°/55°, the 800m route was first climbed in August 1961 by the Austrian alpinists Helmuth Drachsler and Walter Gstrein and is considered a classic north face climb above the Argentière basin. And also one of the most difficult ski descents in the area, so much so that after the first ski descent on 3 July 1977 by Daniel Chauchefoin, eighteen years passed before Pierre Tardivel, Emmanuel Ballot and Edouard Cottignies repeated the line in 1995. In 2006 Roch Malnuit pulled off the first snowboard descent, accompanied by Yohan Courcelles on skis, and that’s pretty much it.

Conditions in the Mont Blanc massif are truly exceptional at present, described as being "once in a lifetime" by insiders due to recent extremely damp snowfall that has literally plastered the north faces white. Unsurprisingly alpinists are taking advantage of this situation and, using Chamonix as a base, a startling number of difficult descents are being carried out on a daily basis.

Boissenot reported "There were lot of people in Argentiere on Sunday morning, so much so that took the third cable car up to Les Grands Montets. We started to climb the face with Stef Roguet in order to check out the snow conditions while Titi Gentet and Nico Brunel, who were two cable car behind us, decided to climb the slightly easier north-east face.

Conditions looked good in the face, and the top was incredible! We reached the summit at the same time as Titi and Nico, so they decided to join us down the Austrian route. There was lot of sluff in the first part, they were following us, about 100 meters behind. The descent was certainly tricky, also because during the descent we also encountered some other mountaineers climbing the route. The face is really steep and long, and Aiguille du Moine a couple of weeks ago was good training… We did 2 shorts rappel at the end. In short: a crazy face, crazy conditions, really impressive to ski down. One of the best ski descents of our lives!"