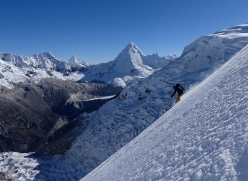 Steep skiing in Peru, with Artesonraju (6025m) in the background
Photo by Yannick Boissenot 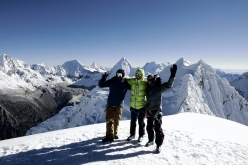 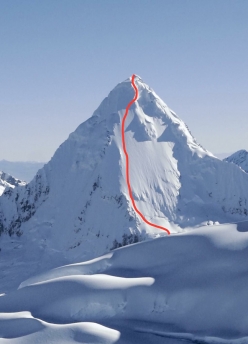 Artesonraju (6025m), Peru and the line skied for the first time by Patrick Vallencant in 1979.
Photo by Yannick Boissenot 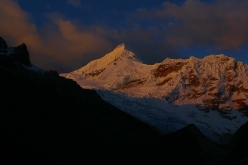 The trailer for Curvas Peligrosas, the film directed by Yannick Boissenot documenting a month spent in Peru together with Frederic Gentet and Stéphane Roguet where the trio made several steep skiing descents including Artesonraju, Huascaran and Tocllaraju.

After having scored some major descents in the Mont Blanc massif, such as the SE Face of Aiguille du Moine and the Austrian Route down the North Face of Les Courtes, last summer the French alpinists Frederic Gentet, Stephane Roguet and Yannick Boissenot spent a month in the Cordillera Blanca massif in Peru searching for their perfect lines. Unsurprisingly the expedition skied some impressive lines, including the SE Face of Artesonraju (6025m) without any abseils, Huascaran (6768m) down the El Escudo shield and the North Face of Tocllaraju 6034m). Their runs have been documented in Curvas Peligrosas which will be premiered in Grenoble on 8 November. Here’s the trailer.

17.12.2014
Michel Piola and his passion for new routing
The film by Yannick Boissenot called Passion d'ouverture that documents the life and climbing activity of Swiss alpinist and rock climber Michel Piola.