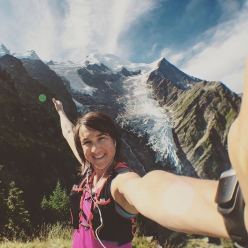 Liv Sansoz 82 x 4000m: backyard mountains above Chamonix... 'This move was a good move, it gave me a lot and opened new doors and new possibilities.'
Photo by Liv Sansoz archive 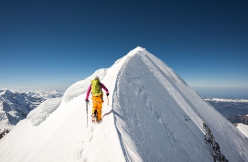 Liv Sansoz 82 x 4000m: Jungfrau - Monch. 'I wanted to do it starting from down on the valley floor and not use any lifts. It adds a little something to the entire undertaking and it was awesome to do it that way.'
Photo by Ben Tibbetts 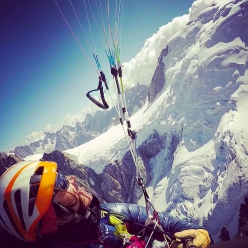 Liv Sansoz 82 x 4000m: 'flying is something very special.One of man’s oldest dreams. So when you manage to combine it with mountaineering or climbing, it adds a very special taste to your ascent.'
Photo by Liv Sansoz archive 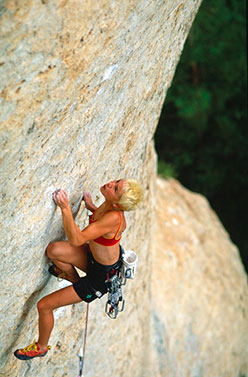 PORTFOLIO / gallery Portfolio: Liv Sansoz / Beyond climbing the 82 4000m peaks in the Alps

Interview with French climber and alpinist Liv Sansoz after having completed all 82 alpine four-thousanders.

Just over a month ago, 41-year-old Liv Sansoz from France made the headlines for having completed all 82 alpine four-thousanders. Concluding this tour struck a cord for several reasons, perhaps mostly because at the end of the previous millennium Sansoz was one of the world’s premier sport climbers: with her ascent of Hasta la Vista at Mount Charleston, USA, she became only the second woman in the world to climb 8c+ in 2000, she was crowned Lead World Champion in 1999 and 1997 while in 1996, 1998 and 2000 she won three World Lead Cups. One can be forgiven for thinking that little indicated this huge shift towards alpinism and the mountains in general but, as is often the case, appearances are deceptive and roots far deeper than one might imagine.

Can you still remember your first time on Mont Blanc?
Of course, I’ll never forget it. When I was 14 or 15, I asked my dad to climb Mont Blanc. He was working a lot during the whole summer and had no time, but I kept asking him every week. Towards the end of summer we got a 2-day weather window so we went. We had no booking and the old Gouter hut was full, but the hut warden let us sleep in the kitchen. Unfortunately, the next day we got caught in bad weather and thick clouds, so the summit was a little disappointing with no view, just a total white out. On the descent we even got a little lost for a while, the clouds were too thick and the tracks had been swept away by the wind. We waited between Vallot and the Dome du Gouter until we could see where to go. It finally cleared up and we had to race down. The next day I was meant to be competing in my first national championship competition and we still had some driving to do, but I was just too happy. I had finally got to climb our highest mountain after waiting the whole summer! In the end I got there just in time. And placed 3rd!

So although many remember you from your sport climbing days, in truth the mountains have always been an important part of your life.
Absolutely. It’s the mountains that brought me to sport climbing, not the opposite. When I was 10 or 11, I always saw my dad going ski touring at the weekends and naturally I asked him to take me with him. He offered to invite some of my school friends to make it more fun. In the beginning they came, but didn’t enjoy it so much while I on the other hand really fell in love with the mountains. From that moment on I was in the mountains every weekend with my dad and some of his friends. It’s a bit funny to think back to it now, because at that time there was no gear for small girls. For 2 or 3 winters I did everything with my normal ski boots and normal skis. We just cut a pair of skins to the right size and bought a heavy binding adaptation system.

Sport climbing though was a really important part of your life. Looking back on it now, what did it give you? What did those competitions give you?
Sport climbing gave me lot. And competitions probably even more. The competition scene is very special, and it’s also very interesting. You have to be ready and at your best on that specific day, at that specific moment. You have to be capable of surpassing yourself to a point even you had no idea you could reach. You dig deep inside to give everything you have. This is something that isn’t easy to do. But if you discover how to do it, then everything gets really powerful, things flow, you don’t feel the pressure anymore. You are in a very special state of mind. Actually, this reminds me of my last two last years of competitions: I wasn’t there to send the final route. I was there to send the superfinal route. That was my one and only goal.

There was a period in your life though when things were not the best. If it’s not too painful, can you shed some light on this darkness?
Indeed. I went through some tough moments. The worst one was probably when I got dropped at the crag and was badly injured. It stopped me at a moment in my life when I was one the best female sport climbers in the world. It was hard, not only dealing with the actual injury, but also because I had done nothing wrong and was the victim of someone else's mistake which somehow destroyed a bit of the person I had been. It took me years after that to feel I wanted to climb again and to be happy climbing once more. But I believe that with every bad experience, there is something one can learn, or at least there is a transformation one must make, to try and become a better person. I learnt, I matured, I changed and decided the most important thing in my life was to pursue my dreams.

You moved to Chamonix
After I had a second big accident I decided it was time for a change, time to find a place I would call home, instead of always traveling and having my life contained in two bags. I have to admit I was unsure about Chamonix because everyone around me spoke very negatively about Cham, but I decided I’d give a try. And after just three weeks I knew it was the place for me. The community of climbers, skiers, alpinist and paragliders is huge and I loved the cosmopolitan aspect this town offers. It’s always a good mix of great people and great activities. And it was great to meet a lot of strong female alpinists or skiers and spend time in the mountains with them. This move was a good move, it gave me a lot and opened new doors and new possibilities.

You mentioned paraliders, strong alpinists. You’re a keen advocate of paralpinism. What makes this so special?
First of all, flying is something very special. One of man’s oldest dreams. So when you manage to combine it with mountaineering or climbing, it adds a very special taste to your ascent. The gear has evolved a lot the past few years and although it still adds some weight and volume, most of the time it’s totally worth the load. I personally use a single surface wing in the mountains, the Skin Plume and I have to say it’s pretty good!

You made headline news a month ago with your ascents of all 82 4000ers in the Alps. What was important for you during this project? What did you want to do and not want to do?
It was an important project for me and for a few different reasons. After being injured two or three times a year for 5 years I needed a different challenge, and standing on top of a 4000er in the Bernese Alps made me wanting to climb them all. On the other hand, I discovered that the media would only talk about the mountains either when there was a mega performance which had dealt with huge risks, or when there something dramatic had happened. It’s not often that the media deals with the mountains that most people climb, and so I thought that this 82 x 4000 project was a good opportunity to show the human aspect of the mountains, not only the dramatic or high risk moments. Something else that was important for me was to share this project with as many friends as possible. And, last but not least, I wanted to do it starting from down on the valley floor and not use any lifts. It adds a little something to the entire undertaking and it was awesome to do it that way.

What moments do you remember most of this journey across the highest in the Alps?
I think I remember all of them very well, from how I felt when we started to how I feel now that I climbed them all. But of course maybe the last ascent, with Roger Schaeli on the Integrale de Peuterey and with the flight back down, that’s going to be the most memorable moment. I hadn’t planned to climb Peuterey at that time of the year, and I thought I would only go try it next June. Actually, I wasn’t acclimatised at all, conditions in the route were far from perfect and Roger was still quite new to paragliding, so I was a bit concerned about him flying off the top of Mont Blanc. But in the end everything went very smoothly, we managed everything well, we had a good flow and that’s always a lovely feeling.

Presumably there were tough times on this journey?
Yes, there were were indeed. I got some very bad frostbite in late April, while a cold front came and temperatures dropped to -20°C. My body was tired and couldn’t fight the cold. Also during this period I lost four friends in the mountains. Ueli Steck on Nuptse in late April, and a week later three of my childhood friends perished in an avalanche. That really put me down. I questioned myself a lot after that. But then the desire for the mountains returned and I took one day after the other. Generally speaking there was quite a bit of logistics revolved around this project but I tried to keep it simple, light and fun from the beginning to the end.

Going back to that moment when you reached the summit of Mont Blanc with Roger. You knew it wasn’t just another summit…
That was for sure much more than just another summit. That was a very special moment with Roger. For most people, climbing the Peuterey Integral in itself is already a great achievement. For me, too, it was an important undertaking, but added to the actual ascent was “the completion of a long project.” As it happens, we got to fly off Mont Blanc after carrying our glider for two days. It’s hard to find the right words to describe the happiness I felt up there on the summit and on my glide back home, but I’m sure you can easily imagine it.

Last question Liv: how have you changed over the years?
Haha, a lot. But only in the best of all ways possible ;-)