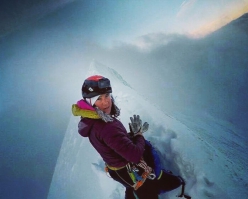 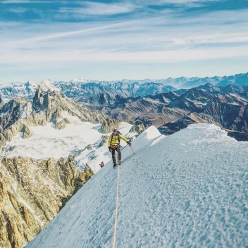 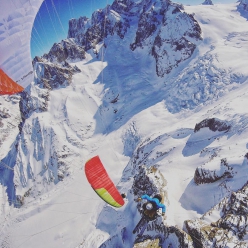 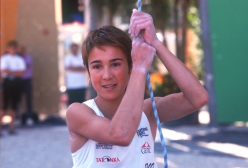 Born in 1977, at the turn of the new millennium Sansoz was one of the best sport climbers in the world, becoming Lead World Champion in 1999 and 1997 and winning the Lead World Cup in 1996, 1998 and 2000. Despite her tight competition schedule she nevertheless found the time for climbing outdoors, and with her repeat of Hasta la Vista at Mount Charleston in the USA she became only the second woman in the world to climb a route graded 8c/8c+. Before her only Basque powerhouse Josune Bereziartu had succeeded in such a feat.

In 2001 Sansoz transferred her great competition skills to ice, successfully winning the Ice Climbing World Cup later that year. After a dark period in her life following a climbing accident, she moved to Chamonix and dedicated herself more and more to her early love, the mountains in all its forms. This included skiing and mountaineering, as well as paragliding and fast para-alpinism ascents and descents.

Sansoz is one of the very few women who have completed this impressive list of all the highest mountains in the Alps and, according to French press, she is the first French woman to do so. What is remarkable is the Sansoz’s style of ascents and descents: always from the valley floor, without using lifts, and often mixing her outings with paragliding descents. Just like three days ago, when after completing one of the most sought-after ridge climbs in the Alps, the Peutérey Integral ridge, she took off from the summit of Mont Blanc and glided gently home. Class.

What a feeling and so much happiness! / . . Last monday and tuesday, @rogerschaeli and myself teamed up for the Integrale de Peuterey. We had a good flow, a great energy and although some parts were tricky everything was rolling. It was just fantastic to climb together this long, wild and beautiful ascent and stand on top of Blanche de Peuterey and Grand Pilier d’Angle (my two last summits of 4000m amongst 82). On top of that, we were lucky enough to both take off off the Mont Blanc summit after carrying our gliders for two days. That is definitely one of the most aesthetic combo, alpinism and fly, we could have hoped to do. Massive thanks to Roger for being here for this last 4000m peaks adventure, for your great energy, wild imagination and for your trust and support! And congrats for flying off Mont Blanc with just a little number of previous flights! I wonder what would be next! / . . @rogerschaeli on the last ridge below Mont Blanc de Courmayeur. On the right background, the Blanche de Peuterey and further the Noire de Peuterey . . #livalongtheway #timetoplay #4000mpeaks #peutereyintegral #seatosummit #montblanc #blanchedepeuterey #grand pilierdangle #anicewalkinthepark #mountainversatility #protectourwinters