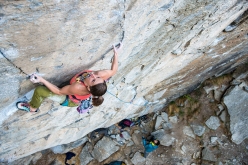 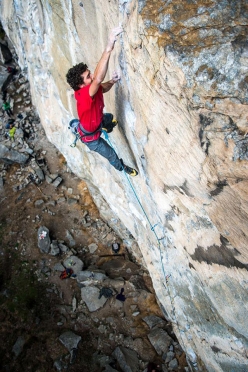 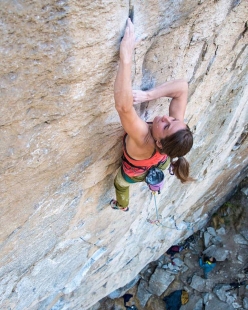 Interview with Jacopo Larcher and Barbara Zangerl after the first free ascent of Gondo Crack at the crag Cippo in Switzerland. The duo freed the route as an 8c sport climb and then did without the bolts and climbed the route with nuts and friends to produce one of the toughest trad cracks in the world.

It’s them again, Jacopo Larcher and Barbara Zangerl. After the difficult sport climbing at Siurana in Spain, after the huge big wall Free Zodiac on El Capitan in Yosemite and after the difficult trad routes in Scotland, the Italian - Austrian duo have now come up trumps once again: the first free ascent of Gondo Crack at Cippo. The route in question is a thin, slightly overhanging crack on the Italian- Swiss border, bolted years ago and attempted on and off by some of the world’s most experienced crack climbers. After a brief courtship Zangerl and Larcher freed the route as a sport climb and then, the following day, Larcher did without the bolts and climbed it as a trad route, just as he had done with Lapoterapia at Osso in 2015. Shortly afterwards Zangerl clipped a rack of nuts and friends to her climbing harness and sent the route in this greenpoint style, too. Needless to say, this completion of an old project is heralded in as one of the hardest female trad climbs to date.

Gondo Crack has a long history... For the benefit of those unfamiliar with this crack, can you give us some background info?
Larcher:
Gondo Crack was bolted in the late '90s by two icons of the Ossola climbing scene, namely Maurizio Pellizzon and Alessandro Manini. It’s a thin, leftwards trending crack that splits the slightly overhanging face; the first section, up to a rest at 2/3 height, is relatively simple (7c), which means that all the difficulties are condensed into the final meters. Over the years the climb resisted all attempts and became one of the most "popular" projects in the area. It was only after our ascent that we realised how important this route had become for the locals!

When did you first lay your hands on it? And how did it go?
Zangerl:
We tried the route for the first time in early October, just before leaving for Yosemite.
Larcher: The local climbers continued to talk to me about it, and since at the time we were at Cadarese nearby, we decided to go and check it out. We immediately liked the route, although it did take us a while to find the right beta for the upper crux. This is really complicated: the rock is smooth and the footholds are particularly slippery. We didn’t have much time, so we decided to return in spring.

So you came back on firing form after Spain...
Zangerl: After our trip to Spain we wanted to pull our trad gear out of the closet and we headed straight there! Although the route is bolted, it was clear right from the outset that we wanted to climb it greenpoint.

Explain
Zangerl: In order to prepare for our trad ascent we first started working it by clipping into the bolts. Toproping it to avoid using the bolts made no sense. Fortunately this time round we manage to tame the route relatively quickly, thanks to our Spanish form and the good conditions.

Just curious: who freed the route?
Larcher: Actually it was Babsi who first climbed it free with bolts: she was amazing! I followed her lead shortly afterwards… sometimes it's hard to keep up! ;-)

But then you tried it as a trad climb...
Larcher: Yes. The real goal for both was to climb it greenpoint. I know that many may find this decision difficult to understand, seeing that the route is bolted, but for us it made more sense climbing it with trad gear. It’s a really logical line, that doesn’t necessarily require the bolts to be climbed. If you do it like this, it requires more effort, but it also provides far stronger emotions

After Jacopo’s first free trad ascent, you Barbara freed it trad, too
Zangerl: Yes, the next day I climbed it trad, too. It was great. Being motivated for the same route, and both succeeding, was cool. The biggest challenge for me was to remain focused on the crux and not think about the fall. Placing the gear means getting a bit pumped and a bit worried when you reach the crux. Mentally it was far harder as a trad climb, but that’s exactly what makes trad climbing so exciting, and why the overall experience is very pure and intense.

Talking about the the fall: how much did you risk?
Larcher: I don’t think we risked much, but it's always hard to judge these things properly. The pro in the first part is mediocre, and honestly we had no desire to make a controlled fall and test them. The last two pieces of pro are right at the start of the crux, from there there’s the long run-out all the way to reach the chain… seeing that that’s where the hard moves are, falling off is a possibility! The last friend we placed seems good (X4 #0.3), but if that should rip out for some reason, you might fall to the ground.

What can you say about the grade therefore? What can it be compared to?
Larcher: With regards to the danger, it could be compared to Achmine at Dumbarton in Scotland, but we have too little experience to give it a British trad grade (that would be pointless anyway, seeing that it has bolts). So we used the french grades and simply referred to technical difficulties.
Zangerl: If you want to give it a danger grade, I reckon it would be more sensible to use the American scale… so 5.14b R.

Last question: you left the crack as you found it, in both its sport and trad versions. Why?
Larcher: The route was bolted nearly 20 years ago and there are many people who continue to try it: it never even occurred to us to take the bolts out. Personally, were I to find a similar line then I wouldn’t bolt it, but that’s just my point of view. I hope that our ascent helps spread this "different" way of interpreting climbing, especially in areas such as Ossola, which is a true paradise for trad climbing.