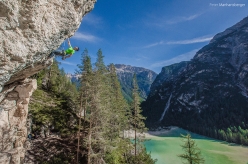 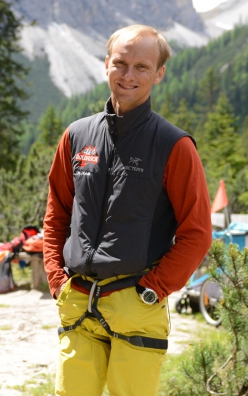 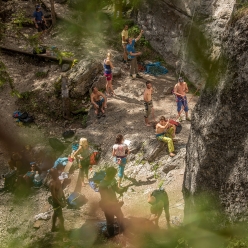 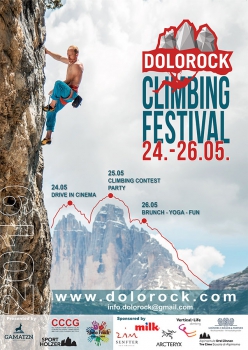 Interview with Christian Sordo, mountain guide and one of the driving forces behind Dolorock, the international climbing meeting that will take place from 24 to 26 May 2019 in Höhlensteintal, close to the Tre Cime di Lavaredo / Drei Zinnen, Dolomites.

Dolorock kicks off on Friday 24 May 2019 in the Höhlensteintal valley in Italy. For the seventh year running the climbing festival will aim to break down linguistic, cultural and geographical barriers. Christian Sordo, the talented climber and mountain guide, helped create the event and we chatted to him to find out more.

Christian, Dolorock is about to celebrate its seventh anniversary. How this event get started in the first place?
Well that’s actually an interesting question. Back in 2013 rock climbing in Höhlensteintal, in the Val di Landro, as we know it today was very different. There were few of us, and there were problems between us climbers and the two parks that manage the area. In fact, they didn’t particularly like us and wanted to shut down some of the crags in the valley. Sport climbing didn’t really have a "voice" because it seemed like this sport was just for a tiny handful of people.

So what happened?
At this point we asked ourselves what we could do, and that’s how we got the idea of ​​having this climbing meeting. We reckoned the festival could be a way of demonstrating to everyone, even those who don’t climb at all, that rock climbing can actually be something positive for the valley, and by staging the evening party in the village, we wanted to give everyone the chance to get to know each other better. Gamatzn, our mountaineering group, was founded on the basis of promoting the spirit of openness towards others, we believe boundaries mustn’t exist, and we reckon that thanks to the meeting we actually managed to establish a good relationship with the institutions.

The idea proved successful!
Yes, but we were also lucky. The Toblach Tourist Board and the Toblach town council decided to give us a hand right from year one. Our greatest luck though was having the support of the local Cultural Club who organised the party. Working closely together we tried to show the governing bodies of the parks, and also the local population, that we are not just 5 mad climbers, but actually hundreds and hundreds of very normal people. That’s also why the party on Saturday evening down in the village is so important, because it’s not just for the climbers but also for the locals who don’t climb at all. It’s an opportunity to meet, exchange ideas, maybe even different languages, to have fun and understand each other.

So the seventh edition is just around the corner
With the tried and tested formula which was proven to be extremely popular. Dolorock is a meeting, not a competition, and the two days are really relaxing, time seems to tick a little slower than usual. Many arrive on Friday evening for the drive-in cinema, then they sleep in their vans or in tents, ready for Saturday's climbing.

Which is done with your Redpoint Fight formula ...
That’s what it's called, yes, but it's not a battle! Quite the opposite! It is important to realise that this isn’t climbing marathon like at many other climbing meetings, but what counts are the 5 hardest routes. We make a distinction between the different climbing styles, ie redpoint, onsight and flash, and there are various groups: pros, amateurs, Over 50 and Under 18, male & female. There’s also the mean value, where the winner isn’t the person who has the highest score, but whose value is closest to the average. Neat!

Where can people climb?
Up in the valley there are 14 crags and circa 500 routes, so there’s something for everyone. Perhaps many who look at the photos reckon that the climbing is tough but that’s absolutely not the case. The Alpini crag for instance has about forty routes from the 4a to 7a, with most in the region of 6a/6b. Even Landro Classico has over 90 routes, many of them up to 6c. So there’s a lot to do!

What do you expect this year?
In the past few years a lot of people have come from the German speaking areas, from the South Tyrol, from Austria and Switzerland. We expect them to come again, and we’d be really happy if more Italian speaking climbers came, too. We'll see...

Do you already know if any famous climbers will be taking part?
No, we don't. In the past we’ve had star climbers such as David Lama, Jacopo Larcher and Barbara Zangerl taking part, but since we don't invite climbers specifically, who turns up is always a surprise, even for us. And we hope to be pleasantly surprised again this year!

For more information check out www.dolorock.com

Dolorock Climbing Festival
Organised since 2013 by Gamatzn, the South Tyrolean climbing club that brings together climbers and mountaineers of Val Pusteria, Dolorock aims to use climbing to overcome linguistic, cultural and geographical barriers. The meeting is designed welcome diversity, promote tolerance and nurture critical discussions on issues related to climbing and mountaineering.