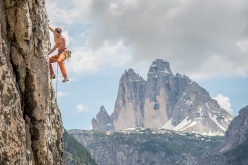 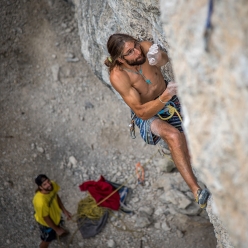 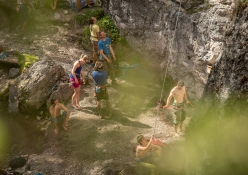 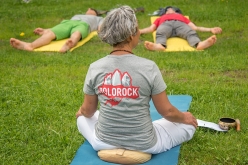 The Dolorock Climbing Festival took place once again during the last weekend of May, from 25 - 27/05, organised by the local climbing club 'Gamatzn'. Special guest of this transborder sports and culture event was David Lama, the main protagonist was rock climbing and the backdrop were the fantastic Tre Cime di Lavaredo and the Dolomites.

As for the previous editions, the program of the Dolorock Climbing Festival included a cultural event, a climbing competition, the by now legendary climbers’ party and rock climbing for children. And just as in previous years, the organising committee was delighted with the international interest, with the high proportion of women taking part in the meeting and with having reached the maximum quota of participants. World famous climber and alpinist David Lama taking part in the meeting was a particular highlight.

This year the festival began with somewhat unusual event: on Friday evening spectators watched a cult film about the history of climbing (Schrei aus Stein, meaning Scream of Stone, directed by Werner Herzog) from their comfort of their cars. Before the movie started two of the film’s stuntmen were interviewed about their on-set experience. Popcorn, drinks and hot dogs ensured the right drive-in cinema feeling and the event proved very popular, with every single parking space occupied.

On Saturday the Red Point Fight took place at various crags dotted throughout Val di Landro. From 10:00 am to 5:00 pm the competition took place in bright sunshine. In the women’s pro category Katrin Mair climbed to victory followed by Carmen Brugger and Mira Wizemann, second and third respectively. Mark Oberlechner won both the men’s pro category and the men’s overall, ahead of Moritz Sigmund and Alex Walpoth.

Victory in the junior girls category went to Julia Poppeller, followed by Maja Gritsch and Maya Klaunzer, while Patrick Tirler won the the junior boys title ahead of Nicolas Zingerle and Daniel Watschinger. In the men’s 50+ Heli Mühlmann climbed to victory. Second place went to Manfred Wurzer, followed by Erwin Aberger.

After the awards ceremony the celebrations continued into the night with dancing at the Dolorock climbers’ party, where the band “Cindy and the Rock History” ensured a great atmosphere. The by now legendary party was organised once again by the Circolo Culturale from Toblach.

Climbers’ brunch was served on Sunday from 8:30 am to 11:00 am in the Dolorock Arena directly next to the campsite. After breakfast tired limbs were revived during the “Yoga for climbers” session, while Sexten hosted a children’s climbing day that proved popular.

The Dolorock organising committee will now begin its summer break. Members are already looking forward to the 7th edition of the Dolorock Festivals at the end of May 2019!

For more information check out www.dolorock.com

02.05.2018
Dolorock 2018 climbing festival in the Dolomites
From 25 to 27 May 2018 the sixth edition of the Dolorock Climbing Festival will take place all around the Tre Cime di Lavaredo, Dolomites.