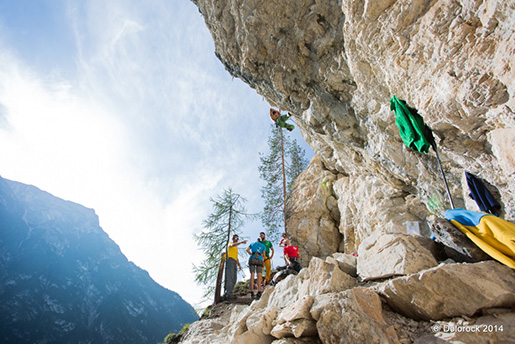 The Landro Valley/Höhlensteintal is a side valley of the Alta Pusteria/Hochpustertal, which is situated in the east of Southtyrol. Approximately at the middle of the valley, the gorgeous view to the world-famous Tre Cime di Lavaredo/Drei Zinnen, which is a prominent massif and part of the UNESCO world heritage Dolomites, is taking every climber’s breath away. The Tre Cime and the Dolomites are a famous destination for ambitious trad climbers and mountain lovers.

Not only trad climbing but also sportclimbing can be practiced at its best in this valley. Just southwards and right next to the road, you encounter the magnificent Lago di Landro/Dürrensee. A remarkable number of crags have emerged around this lake and throughout the valley, in particular, due to the tireless efforts of the local Hannes Pfeifhofer and his friends, who have bolted route after route, on both sides of the valley, wherever suitable rock could be found.

The climbing crag „Stube“ in the Landro Valley is a new developed area and already turned out to be a hot spot of climbing in the valley. It seems to be for hard movers who love to climb on solid dolomite rock. The location right above the Landro Lake and the routes from vertical to heavy overhanging rock are pretty varied and leave nothing to be desired. It is probably one of the most beautiful crags in the surrounding area.

In Dobiacco take the street towards Cortina. Follow this street several kilometers, past the viewpoint to the Tre Cime, until you reach the Landro Lake. Park at the end of the lake on the left side. Cross the street and after a few meters, left of the natural reserve sign, follow a good visible path up the forest. A steep path leads to the first crag with three routes. Follow the path und walk up left on a narrow ridge until you reach the crag.

No comments for Stube 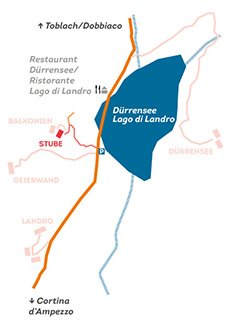 The crag is located at 1460m. Recommended months: April to October.