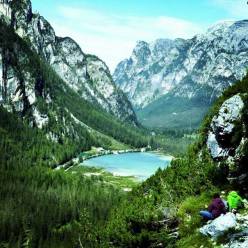 This crag is a new gem in the Landro valley. The first routes were established in the nineties by Massimo da Pozzo and friends and in recent years Hannes Pfeifhofer, a mountain guide from the Tre Cime di Sesto group and famous new router, added numerous new lines to both the cave and the slabs on either side. As you can see from the photos, the climbing varies considerably: pocketed slabs on either sides, and steep overhanging routes through the cave. With routes from 4c - 8c, Grotte Landro really offers something for everyone!